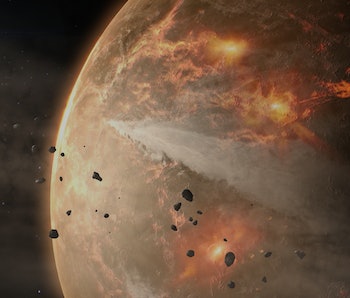 At 5,543 square miles, Connecticut constitutes roughly .002 percent of the Earth’s surface. It’s a small target, but what if an asteroid were Darien-bound? What would happen next?

Well, let’s be specific about our projectiles. Let’s say, for the sake of this exercise, that the aggressor here was a twin of the Chicxulub asteroid, the six-mile-wide space boulder that put the dinosaurs out of business. That doesn’t sound too bad, but clutch your Pottery Barn club cards tight, Connecticut, because this is gonna get messy.

To figure out just how ugly, we can turn to Impact: Earth!, a calculator the good astronomers at Purdue University put together. Let’s say the Nutmeg State Masher is made of dense rock, that rock would hit the hard place that is Connecticut’s crystalline bedrock and likely glance off at around 30 degrees (an angle similar to that of the asteroid that created the Chicxulub crater). The impact velocity would be around 15 km/s, which means anyone enjoying a delicious Harry’s Place hot dog is going to notice the ground moving.

Nutmeg Masher would hit with a force equivalent to 38 trillion tons of TNT. Though the Earth’s orbit likely wouldn’t shift perceptibly, people might want to reset their watches by a millisecond or two while watching the CNN footage and trying to distinguish the fresh 30-mile diameter crater from Hartford proper.

Within the state, things will be looking bad — or like nothing at all. Most organic matter under a five-mile canopy would be vaporized. “Your position was inside the transient crater,” the calculator tells us, “and ejected upon impact.” Brutal.

It would take a few minutes for the air blast to travel the hundred miles or so to New York City, where it would cause buildings to collapse, glass windows to burst, bridges to fall, cars to crumple, and up to 90 percent of trees to fall over. In the stratosphere, vaporized rock would cool into bits of glass that would rain from above. And it’s possible the heat of the impact would start forest fires around the globe.

Should any Whalers fans manage to live to see the hellscape the Northeast has become, they’d get very cold very fast. The ash and ejecta thrown up in the sky would start to choke off the sunlight completely. The Earth would plunge into a so-called impact winter. Time to reach for those L.L. Bean jackets and pull on some Duck Boots.