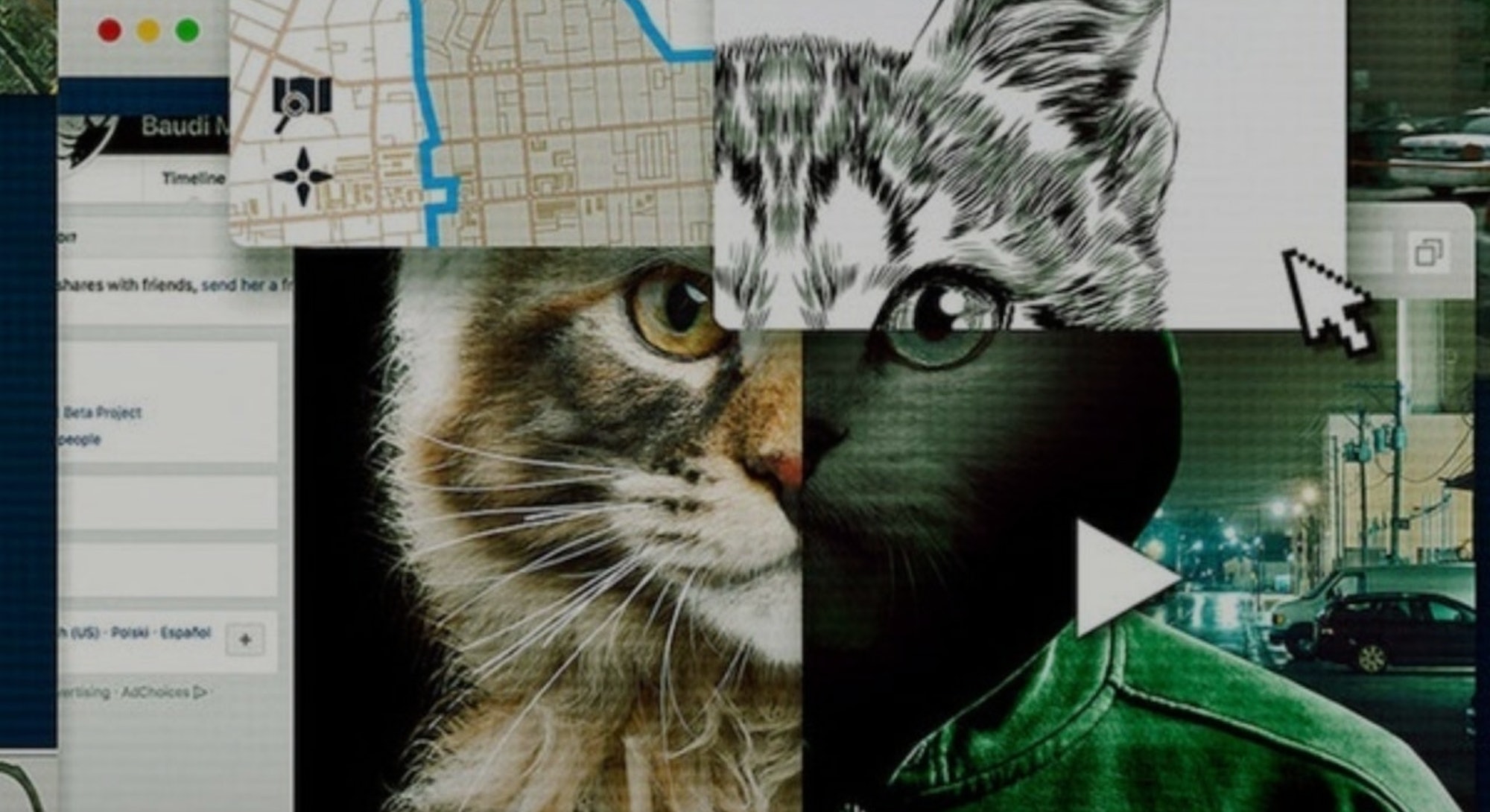 Deanna Thompson, aka “Baudi Moovan”, loves the Internet. “I can be anybody I want online,” she says with a mix of childlike wonder and self-assured verve.

The self-described “textbook definition of a computer nerd,” and one of the main subjects of Mark Lewis’ Netflix docu-series on killer Luka Magnotta, Don’t F**k with Cats: Hunting an Internet Killer, Thompson is presented as an amateur anthropologist of the internet, familiar with its various nooks, crannies, and crevices. Along with a quasi-partner in crime-fighting, “John Green”, and a number of others in a Facebook group, they play digital Sherlock Holmes in search of someone posting videos of animal abuse on YouTube, which would itself, over the course of 18 months, turn into an international manhunt.

The pair’s fascination with the expansive possibilities of the internet are offered as credentials that they are trustworthy narrators, and investigators of a so-called “Internet killer”. Having met in a Facebook group dedicated to tracking down the original poster of an animal abuse video, Thompson (a Vegas casino data analyst), Green (a Los Angeles resident — that’s all we’re told about him), and director Lewis, illustrate the way we all use the internet, seemingly without realizing it. They’re watching, and we’re watching them watching — we literally see Thompson watch one of the horrific videos on her computer — but it’s almost like they haven’t noticed that curious positioning of power and spectator.

Much of the action takes place in the early 2010s, and yet the way Thompson and Green describe their investigation illuminates what we understand now as de facto: we are being watched at all times and everywhere, but we’re the ones watching. In this way, Don’t F**k with Cats examines how social media and the internet shape our obsessions and temptations with voyeurism, how it’s changed how and who we watch, and even who might be watching us.

Like Jimmy Stewart in Alfred Hitchcock’s Rear Window, we’re all just staring into the lives of others through the window of our computer screens and inventing narratives based on what we see.

The depths of the internet are so vast and abyss-like it’s easy to stumble upon objects and artifacts beyond what we could reflexively imagine. It is oceanic in nature, ebbing and flowing, the unknown just as enticing to casual observers and obsessives alike. Yet, the newness of the internet, and its call for new ways of seeing, hearing, and thinking has proved a challenge to many filmmakers trying to depict it on screen. Five years after the release of Every Frame a Painting’s video essay on texting in film, the obstacles it illustrates are as relevant as ever.

Certainly, it is an issue of intangibility. The web looks like something but it isn’t physical. How do you give depth to something whose depth is almost imaginary? What complicates this even more is that the internet and all the things we do on our computers have become inextricable to our real, physical lives, with tangible, material consequences, good, bad, and everything in between.

Perhaps the best attempt is the computer screen film, or desktop film, which explicitly depicts actions on a computer on a computer. The screen is the frame, and every click, tap, typo, and buffering video a line of unspoken dialogue.

With origins as early as 2002 in The Collingswood Story, and popularized both by video essayists like Kevin B. Lee and director/producer Levan Gabriadze (Unfriended) and producer Timur Bekmambetov (Searching, Unfriended: Dark Web), this format has found the most comfort in genres where information is omitted and then revealed, like horror movies and procedurals. More than most kinds of filmmaking, desktop films are about information as narrative; not just who is whom, but what they did, how they did it, where, when, and so on. The footprints are more easily seen on the web, even when they’re erased.

Don’t F**k with Cats, then, is easy to mold into a procedural thriller as these amateur gumshoes, the community that sought after the perpetrator years before the police took action — and a handful of other characters along the way — describe the ways in which they analyzed every minute detail of the videos that the soon-to-be-revealed Luka Magnotta was posting: wall sockets, vacuums, the layout of the room in which he committed these terrible acts, the poster on the wall, the blanket.

Their search is taken further as they unpack which videos “sock puppet accounts” have liked, references in text that the killer has slipped in, music in the background of other videos, old interviews, Photoshopped pictures, buildings in the background of photos, Google StreetView perspectives, and other internet ephemera. They’re blown up and zoomed in on, cursors directing our line of sight as Thompson peppers the information gathering with dollops of pop armchair psychology.

The issue of surveillance is nothing new, but the degree to which we now surveil each other on social media and elsewhere online is rarely reflected on. In Don’t F**k with Cats, it’s the gateway into a story. Taking data from photos, post locations, seller date and locations, and other data points comes so easily to these internet sleuths. They hardly pause to think of the consequences, and when they do, it’s more in the context of egging Magnotta on in his obsession with finding an audience than it is in grappling with their own voyeurism.

The internet invites this strange, parasitic relationship. Peeping into the lives of others and the performance of atrocities for an audience are both versions of the same kind of people, weaned on the vein of thrillers and cat and mouse games that Magnotta himself crammed into his crimes. Magnotta’s crimes, and the distribution of their execution, are like meta-theatre, self-reflexive in their ability to embed references to films like Catch Me If You Can, Casablanca, and Basic Instinct. With the various breaking of his imagined fourth wall and taunting of Thompson and Green, the case resembles Zodiac, but for cinephiles.

Through the internet and through film, Magnotta created identities and personas, but so does everyone else, not least of all our narrators, both of whom conducted the investigation under aliases on Facebook. Don’t F**k with Cats’s desktop film tendencies portray not only the ease of shifting personas online, but also the way our language and rhetorical habits change. Thompson and Green designate themselves as level-headed, contrasted against the flurry of more vociferous posts and comments, typed on screen in “real time.”

Though it’s rooted in her loyalty to her son, even Magnotta’s mother, Anna Yourkin, is aware of the strange Rear Window dynamic between these amateur detectives and their self-initiated manhunt.

“They’re so inquisitive, and yet so naive,” she says to the camera in the third episode, her frail voice trembling. “They’d zoom in on pictures to make sure that this is the location he’s saying he was in at a certain time. ‘Oh, we’ve tracked him here. We’ve done this. We’ve put this picture and matched it up with this streetlamp from this certain location.’”

She’s got a point: Though Thompson, Green, and others in the group would be inclined to say they were motivated by protecting animals and preventing continued violence, there’s a rubbernecking aspect to the proceedings. Jimmy Stewart’s telephoto lens isn’t so different from zooming in on a blurry PhotoShopped window afterall.

Don’t F**k with Cats series is best built, not merely on complicity, but the idea that performance and surveillance are so embedded into our daily lives (Facebook stalking someone you’re going on a first date with, finding a co-worker’s Twitter, liking a crush’s Instagram photos to get their attention) that our awareness of being watched, watching others, and watching other people watch other people is part of our social fabric and human nature itself. Our curiosity about the lives of other people, to weave stories about them, right or wrong. It really is Hitchcock’s 1954 film Rear Window that’s the best foundational text for Don’t F**K with Cats; not only that, but as a prophecy of how our darkest obsessions will only be intensified as the world, and our access to different online tools, changes around us.

Kyle Turner is a queer freelance writer based in Brooklyn, NY. He is a contributor to Paste Magazine, and his writing has been featured in The Village Voice, GQ, Slate, NPR, and the New York Times. He is relieved to know that he is not a golem.

*Don’t Fk with Cats is streaming now on Netflix.*