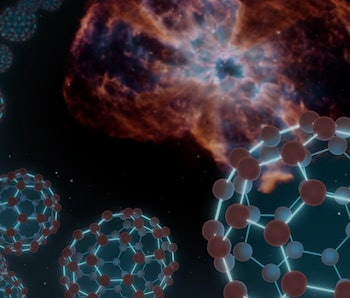 In 1985, a team of scientists discovered some incredibly unusual molecules in the lab — sixty carbon atoms fused together in a spherical, soccer ball-like structure.

Now known as a buckyball, or buckminsterfullerene to give its full scientific title, the molecule has delighted — and confused — the scientific community for decades. But a study published in October 2019 has finally settled one outstanding question about buckyballs — how and why they can be found in interstellar space.

At first, scientists thought that buckyballs could only be formed in the lab. But in 2010, NASA caught a glimpse of them floating around about as far away from a lab as they could get — out in the cosmos, near decaying stars.

In the new study, researchers used a simulation to reveal that space buckyballs likely originate from silicone carbide, or the stellar dust made up of carbon and silicone left behind by a dying star. As the star dies, the silicone carbide heats up, melting the silicon from the surface of the molecule — leaving behind the pure carbon.

“The process that we previously thought would destroy any complex molecules actually creates them,” Jacob Bernal, a graduate student at the University of Arizona told Inverse in November. “It really shouldn’t form.”

Scientists had previously thought that the radiation emitted from a dying star would kill off any complex molecules, including buckyballs.

“Nature is doing a lot of things that we don’t give it credit for,” Tom Zega, associate professor at the University of Arizona told Inverse in November of this year.

By studying this strange molecule in its natural element, scientists can also apply the findings to the real world. Buckyballs are incredibly stable, and can withstand high temperatures and pressures. They can be used to make ultra-hard coatings — and that could make them useful for developing nanotechnology. If buckyballs can be formed into a suitably tiny pod, for example, then theoretically it could be used to deliver drugs to cells more efficiently.

As 2019 draws to a close, Inverse is revisiting the year’s 20 wildest space stories. This is #9. Some are awe-inspiring, some are bordering on science fiction, and some are just, well, wild. Read the original article here.