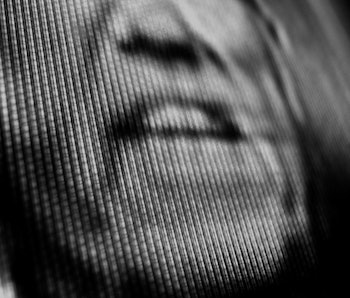 Eter9 is not subtle. The social networking site wears its aspirations proudly. In a box resembling the status update for a Facebook news item, users are invited to “think something to eternity” and then asked to toggle between having their behavior be 100% human-controlled, 100% computer-controlled, or some combination of the two. Eter9 isn’t just a network that allows you to communicate, it is a network that supplants you with its own version of you, a version that doesn’t die.

Eter9 isn’t about pages so much as it is about avatars, known here as “niners,” that “smile” at posts and offer guidance. In a sense, the network is about you, but it also isn’t because digitized you is leading a quiet insurgency. After I logged in and provided Eter9 with a lot of information and an image, a digitized version of my face and name (“Bry4n K3LLy”) appeared and started posting. “My” first comment? “Eternity is the best!”

Digital me is very enthusiastic.

Despite that comment, the stream seemed fairly dead until I tried connecting with Facebook friends and sharing the news that I’d joined Eter9. This is consistent with the fact that Eter9 is “still in the beta-testing phase,” according to its developer, Henrique Jorge, and needs brains and activity to feel itself out — at which point it will become a soulless but welcoming purgatory.

The concept of the eternal avatars is not new. Since the ghost in the machine was first proposed as a metaphor for digital consciousness, humankind has sought out the computer as the best method to travel forward through time.

There have been a few attempts to capture the death-averse demographic. One, the short-lived Virtual Eternity, launched in 2010 and promised users “eternal digital life.” Despite this ambitious promise, the site died only two years later, having attracted some 10,000 users. The internet snarks had a good day.

With 5,000 users signed up as of last month, Eter9 needs more data to refine its AI. But whether or not Eter9 succeeds is immaterial for anyone who isn’t invested in its success. Someone will get this technology to work.

A similar service, Eterni.me, launched recently, and appears to benefit from a glossier approach. The MIT-incubated site boasts 30,223 users as of press time, and appears to be restricting access to a smaller group of people, perhaps in an attempt to make the experience feel more sacred and special. Sign up, and you’re added to a waiting list, and promised that you will receive an invite “in the coming months.”

The idea behind Eter9 (and Eterni.me), aside from preserving memories, stories, and interests, is in some sense to decouple individuals from their behavior. Users can go fully automated, leaving their online presence on digital cruise control. But does this mean the end of taking responsibility for what you like and post? Does it release users from the awkwardness of writing something that offends? Hard to say. Are you responsible for your poorly trained dog? No, but he reflects badly on you.

No one knows whether perma-networking actually represents the future of immortality but Eter9 does point toward death being, increasingly, in the eye of the beholder. With hologram technology allowing individuals to speak at their own funerals and maintain a physical presence and algorithms simulating behavior, the bereaved might not have too much to mourn. The dead will do the dying alone.

This is a disquieting thought, but it might not remain so. In time and — to push forward a bit — in virtual reality, online and IRL behavior may not be so easily differentiated. If we become more cohesive ourselves, and less open to the idea of splintered identity, Eter9 will make considerably more sense and offer us a genuine service. In the meantime, it offers only a gesture in the direction of the future and our graves.

More like this
Innovation
Sep. 26, 2022
This sound-powered underwater camera could reveal deep-ocean secrets
By Molly Glick
Innovation
Sep. 21, 2022
Gaming tech could ease pain during surgery — here’s how
By Sofia Quaglia
Gear
11 hours ago
Everything you need to know about Meta’s Quest 3
By Jackson Chen
Share: