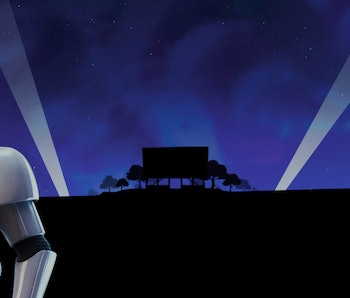 This weekend, Fortnite: Battle Royale will transport players to a galaxy far, far away. While the game has seen plenty of crossovers before, from Stranger Things to Avengers: Endgame, an upcoming Star Wars: The Rise of Skywalker event could be the biggest one yet. Fortnite is treating fans to an exclusive scene from Episode IX, and some intriguing fan theories out there suggest that may just be the tip of the Star Destroyer. Either way, there’s never been a crossover quite like this.

Epic Games announced the crossover in a Saturday blog post, and sometime around then, the movie screen at Risky Reels in the game began playing a teaser video for the event on a loop. There are also Star Wars posters all over the Fortnite island.

“Next weekend, something from a galaxy far, far away is visiting Risky Reels,” the blog post reads. “On Saturday, December 14 at 2 p.m. Eastern, drop in as director J.J. Abrams will reveal never-before-seen footage from Star Wars: The Rise of Skywalker live at Risky Reels. Grab some popcorn and watch the exclusive scene in-game ahead of the movie’s release, only in Fortnite! Remember to drop in early at 1:30 p.m. Eastern when the doors open.”

An exclusive clip from The Rise of Skywalker will debut within the world of Fortnite: Battle Royale projected onto the drive-in movie theater’s screen. It’ll happen during a specific game mode that’ll make this event closer to previous in-game events like “The End” rather than just something occurring in the middle of a regular game.

In other words, players will likely load into a special limited-time mode for this event so that even if they die, they’ll respawn quickly. Otherwise, you’d have players eliminating everyone else just to spoil the fun.

The closest point of comparison for this specific crossover would be the in-game concert that happened in early February of this year. There were several Showtime challenges leading up to the event as some kind of advertising strategy, but aside from that and some exclusive cosmetics, there wasn’t much else to this crossover.

The Star Wars event, however, seems like it’ll be so much more.

For starters, director J.J. Abrams will be a part of it. In all likelihood, he’ll introduce the movie and set up the scene in question. Then, a scene we haven’t seen before will air. (Fortnite was briefly featured in Avengers: Endgame, so Disney does seem rather friendly with Epic Games, especially because Jon Favreau uses the company’s Unreal Engine for The Mandalorian.)

This Star Wars-Fortnite crossover could kick off a major event

One fan on Reddit has an exciting theory that a full-on invasion from the First Order might interrupt the event for an epic Star Wars-themed crossover event. This seems possible given that we saw an extensive crossover between Fortnite and Avengers: Endgame that involved fighting Thanos and an army of enemies.

Might we get several new skins from The Rise of Skywalker and even a special LTM?

About a year ago within Fortnite, an iceberg crashed into the southwestern area of the map and a Santa-looking guy invaded the island with an army of elves. Is an invasion ahead of the holidays an annual tradition? It just might be if this fan theory, or something similar, comes to fruition.

A stormtrooper skin is already a part of Fortnite, but fans seem hopeful that this even could lead to far more than the exclusive debut of a scene from The Rise of Skywalker. One thing’s for sure: If Epic Games introduced a lightsaber pickaxe, they’d have players throwing money right at the screen.

Dive off the battle bus ahead of the Rise of Skywalker clip debut within Fortnite: Battle Royale on Saturday, December 14 at 2 p.m. Eastern.

More like this
Gaming
6.21.2022 7:36 PM
How to complete Nindo Challenges and earn the Manda Glider in Fortnite
By Joseph Yaden
Gaming
23 hours ago
17 years ago, Yakuza reinvented video game masculinity
By Cian Maher
Gaming
21 hours ago
God of War Ragnarok theory reveals a shocking return to a familiar setting
By Joseph Yaden
Related Tags
Share: