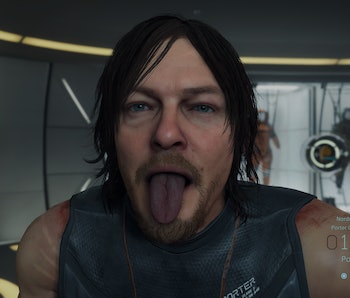 Hideo Kojima’s Death Stranding ventured into territories where other games haven’t dared. It pushed the boundaries of realism by requiring players to poop, pee, shower, and pound Monster energy drinks as they try to awkwardly scale mountains with a mail truck’s worth of packages strapped to their backs. But the game’s approach to multiplayer is probably its most unique mechanic.

Its “shared world” concept lets players construct items others can see, use and boost with likes if they venture down the same path. In theory, this would be used to help other users cross a chasm with a ladder or warn them of a steep cliff. However, Death Stranding players on social media are complaining about trolls who purposefully block off pathways or entrances with vehicles. This can keep players from completing quests or force them to take an entirely new route, which can be incredibly grueling. It’s gotten so bad that Kojima Productions is even working on a fix.

Redditors /u/07ArthurMorgan07 and /u/metalkiid were on their way to complete the same mission only to find the entryway was plugged by a car. Griefers have made the Cosplayer — the NPC played by Conan O’Brien — virtually inaccessible by walling off the narrow entry to his cave with a big ol’ truck. This is the last thing anyone wants to encounter after spending nearly an hour trying not to tumble down a hill.

Vehicles have also been found parallel parked on roadways or even staircases. These are slightly less annoying because you can nudge them out of the way, but one wrong or slip can cause your car to drop all of your cargo in what can only be described as a mailman’s worse nightmare.

Kojima Productions announced in late November that it will patch shared world by letting players edit certain items left by others. The company tweeted that it would allow players to dispose of individual vehicles in an update set for “mid-December.”

Of course, that’s not to say that there aren’t a fair amount of good Samaritans traversing the wasteland of Death Stranding. Items left behind by players can be invaluable when trying to defeat certain enemies and will likely continue to be a core feature of the the game.

But at the same time Death Stranding’s shared world vehicle issues is just another example of how trolls are nearly inescapable online. Even in as a post-apocalyptic deliveryman.

More like this
Entertainment
Jan. 27, 2023
Onyx the Fortuitous and the Talisman of Souls is a cringe comedy as overlong as its title
By Andy Crump
Entertainment
2 hours ago
Last of Us Episode 3 release date, time, and trailer for HBO's zombie show
By Claire Fox
Entertainment
42 minutes ago
Where and how to watch the 2023 Oscar nominees
By Mónica Marie Zorrilla
LEARN SOMETHING NEW EVERY DAY.
Share: