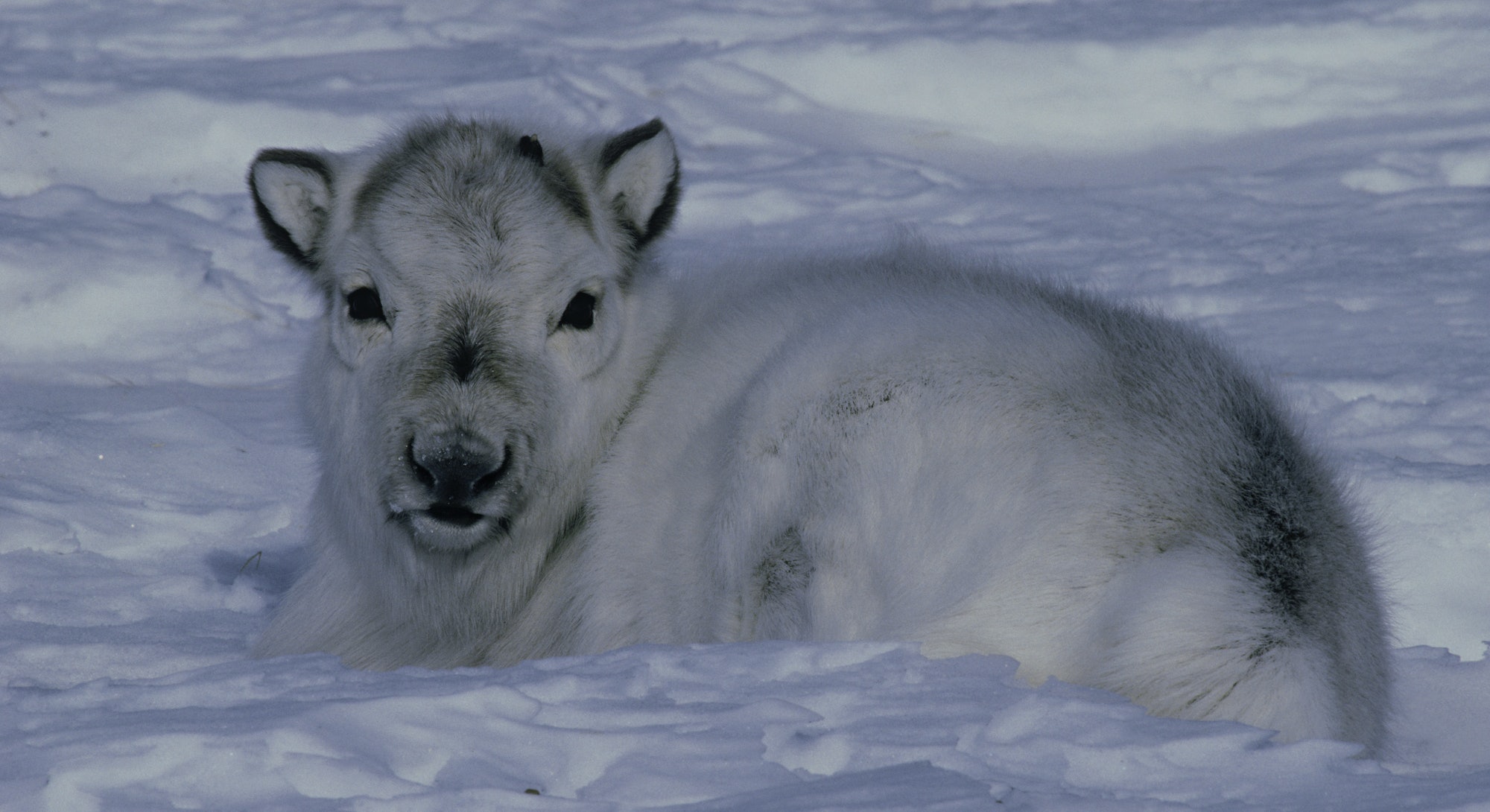 Across the world, reindeer and caribou populations are in decline, under the pressures of a changing climate and human encroachment. One estimate reckons their numbers have fallen by as much as 40 percent in the last three decades. Their disappearance is not just an ecological problem — it also threatens the way of life for indigenous communities.

But there’s good news, too.

On Svalbard, an archipelago off the coast of Norway, the reindeer population is going against the trend. Here, after decades of careful conservation, reindeer are on the rise — in fact, a new study suggests they are thriving.

“We found that Svalbard reindeer are twice more numerous than what was thought,” Mathilde Le Moullec, postdoctoral student at the Norwegian University of Science and Technology, tells Inverse.

"Banning hunting helped their recovery in number, but likely also their dispersal rate."

Le Moullec and her colleagues counted more than 22,000 reindeer on Svalbard — an incredible success story for an animal that was almost hunted to extinction by humans just a century ago. Savalbard reindeers started to repopulate the islands after the Norwegian government took steps to protect the animals from hunting in 1925. Now, the creatures are back in their historical ranges, Le Moullec says, suggesting their population has recovered.

It’s a conservation success story, but it is a tenuous one. The reindeer are under new pressure from climate change — and humans are once more, at least in part, to blame.

The study was published this week in The Journal of Wildlife Management.

To complete the study, the researchers spent three years traversing thousands of kilometers across the hostile Svalbard landscape. On some days, they report, they walked as many as 40 kilometers — that’s like walking to Union City, New Jersey from Manhattan and back.

“It was quite ambitious to gather information across their entire range, but we did it, with sweat, tears, incredibly beautiful moments and happiness,” Le Moullec says. “We really ended in places no one has a reason to go, not even reindeer!”

Along their way, they found fossilized reindeer bones and antlers in the tundra — some of which predated human settlement of the archipelago. They are a testament to how long the reindeer have roamed Svalbard’s unforgiving terrain.

Svalbard reindeer are a subspecies of reindeer, also known as caribou in the United States. They are only found on the Norwegian archipelago, and they have some unique characteristics. Svalbard reindeer are the smallest subspecies of reindeer, the world’s northern-most living herbivore mammal, and absolutely adorable, thanks to their short legs, thick, pale fur, and small heads.

The last population estimate for the reindeer was in 2009, when researchers reported some 10,154 reindeer living on the archipelago. Based on an initial distance count, Le Moullec’s team estimated they would find 21,079 reindeer on Svalbard. They instead found 22,615 animals — far more than they expected, and the highest number of reindeer ever recorded on the islands.

When winter conditions are favorable, the reindeer thrive, but they also don’t migrate, which can lead to food shortages and population crashes. To combat this, the government relocated some reindeer on the west coast, which seemed to work.

But that strategy comes with risks, Le Moullec says. “Translocations also come with problems of unifying and reducing genetic diversity, and the potential of future evolution is tightly linked to genetic diversity.”

That, in turn, is linked to adaptability — something the reindeer may need as the landscape around them continues to change as a result of global warming.

Climate lessons from the Svalbard reindeer

What this study shows is that, despite the pressure of climate change on the reindeer, the consequences of over-hunting are still present a century later — it takes decades for populations to recover. That is solid evidence to continue conservation efforts. But it is also timely, Le Moullec says — climate change on the archipelago and in other reindeer habitats is becoming harder and harder to cope with.

The Svalbard reindeer are the ideal subjects to study the affects of climate change, she says. That’s because they are relatively free from anthropogenic pressures that affect other reindeer and caribou populations around the world.

“In other regions, like in Canada, caribou are affected by industrialization, landscape fragmentation, predation, disease and climate change. It is difficult to isolate the climate change effect,” she says. On Svalbard, by contrast, “climate, which controls food availability, is the driver of population dynamics.”

Svalbard’s reindeer are resilient, however. They populated the islands long before humans set foot there in the 16th century, the researchers say. And today, they can be found in the harshest corners of Svalbard, Le Moullec says.

The future for the reindeer depends on winter weather, she says. If warm spells become more frequent, then that could create problems for the reindeer’s food sources. As a result, there could be a spate of population crashes, which may take a toll on the rest of Svalbard’s delicate ecosystem, the researchers say. At the same time, the sea-ice of Svalbard is receding, which could lead to local populations becoming isolated — making them harder to recolonize if something were to happen.

“For now at least, there is likely enough heterogeneity in growth between populations for some of them to survive a major climatic event,” Le Moullec says.

“The ultimate risk would be to reach tipping points where densities would be so low that populations could get extinct by minor disturbances, but we are not there yet,” she says.

Svalbard reindeer are survivors, but this study shows the real impact humans can have on their population. More action on climate change needs to be taken now to secure their future, Le Moullec says.

“The climate is interconnected on Earth and the Arctic warms so fast because of the Arctic amplification phenomenon,” she says. “So as long as our emissions does not reduce, it is just going to be worse, and for this to happen, our economy and mind-set based on mass consumption need to change.”

Several caribou and reindeer (Rangifer tarandus) populations have experienced recent population declines, often attributed to anthropogenic stressors such as harvesting, landscape fragmentation, and climate change. Svalbard reindeer (R. t. platyrhynchus), the wild reindeer subspecies endemic to the high‐Arctic Svalbard archipelago, was protected in 1925, after most subpopulations had been eradicated by harvest. Although direct pressure from harvest has ceased, indirect anthropogenic stressors from environmental changes have increased in this climate change hot spot. An assessment of the current distribution and abundance is therefore urgently needed. We combined distance sampling (300 km transects, n = 489 reindeer groups) and total counts (1,350 km2, n = 1,349 groups) to estimate the Svalbard reindeer distribution and abundance across its entire range, which we compared with historical data from the literature and radiocarbon‐dated bones. Reindeer have now recolonized nearly all non‐glaciated land (i.e., areas occupied prior to human presence), and their spatial variation in abundance reflects vegetation productivity. Independent of vegetation productivity, however, recently recolonized areas have lower reindeer densities than areas not subject to past extirpation. This suggests that recovery from past overharvesting is still in progress. These incompletely recovered areas are potential targets for increased monitoring frequency and maintaining strict conservation to follow the Svalbard management goal (i.e., virtually untouched wilderness areas). Because of such ongoing recolonization, possibly combined with vegetation greening effects of recent warming, our status estimate of Svalbard reindeer abundance (22,435 [95% CI = 21,452–23,425]) is more than twice a previous estimate based on opportunistic counts. Thus, although our study demonstrates the successful outcome of strict harvesting control implemented a century ago, current and future population trajectories are likely shaped by climate change. © 2019 The Authors. Journal of Wildlife Management Published by Wiley Periodicals, Inc. on behalf of The Wildlife Society.