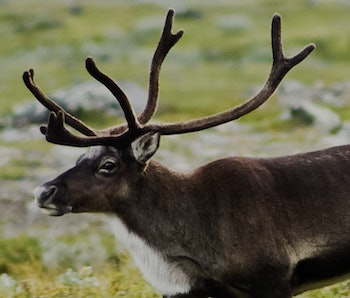 For much of the last ten years, archaeologist William Taylor has spent his time in Mongolia. The country is famous for its pastoral communities — people who have found ways to thrive in some of the harshest landscapes on Earth. Among them are reindeer herders.

These herders, Taylor tells Inverse, depend on the reindeer not only for their livelihoods, but also for their way of life. Now, that existence — and the reindeer — are in danger.

In Northern Mongolia, patches of once-permanent ice are starting to melt. As a result, the region’s reindeer are under threat, finds a study published Wednesday in the journal PLOS ONE. At the same time, melting ice is uncovering long-buried artifacts, exposing them to the elements — and jeopardizing the region’s archaeological record.

Permanent ice throughout the world is proving more fragile than its name suggests. The ice is melting as a result of climate change, and it’s a big problem. Losing even small areas of ice can transform entire landscapes — and, in turn — people’s ways of life.

Ice patches are critical for reindeer. They offer a place to cool down in the summer, escape from insects, and access to fresh drinking water. For the herders who depend on the reindeer, melting ice could have dire consequences.

Taylor’s team spoke with local families to get a sense of what the melting has been like over the past few years. They also drew from people’s knowledge to identify and understand the significance of the artifacts unveiled by the melting ice.

“In many ways that’s the most important contribution of this paper,” Taylor says.

One family Taylor visited as part of the research sticks out in his memory.

“They took us outside and they pointed to a bare, kind of rocky patch of the hillside, and said that up until last year this was an ice patch, and a permanent one,” Taylor says.

Because the patch was close to the family’s home, it was particularly important to them. The relationship between herders and their reindeer is special: their lives are intertwined with one another. Reindeer provide many of the services we associate with other domesticated animals — milk and other dairy products for food, for example, and transportation.

Reindeer are thought to have played a critical role in helping people survive in this region. How the reindeer first became domesticated isn’t well documented. “Most of the important pieces of that story took place in the frozen interiors of Eurasia,” Taylor says.

But while we can’t trace the history of humans’ relationship with reindeer as well as we can domesticated horses, say, it is clearly special. In Mongolia, reindeer may have underpinned the herding economy in mountainous regions of the country as early as 3000 B.C.

“What’s really clear is this is an incredibly deep, sophisticated interrelationship between people and animals,” Taylor says. “One that’s allowed people to thrive in an otherwise cold, incredibly challenging environment.”

Changes in climate have likely driven changes in the economy of the region historically, the study suggests. The transition to herding from hunting and gathering, the adoption of domestic horses, and the formation of nomadic empires could all owe themselves to changes in temperature and precipitation.

Today, these same regions experience global warming at a faster rate than the worldwide average. By 2001, summer temperatures had already reached more than 1.5 degrees Celsius higher than those in the 20th century, according to a United Nations report.

Archaeologists have been able to uncover relatively few historical relics in Mongolia, particularly in higher latitudes. Most of what we do know about the region relies on data from major events like burials. That offers a very limited view of the past, Taylor says.

When ice melts, however, it can reveal new information previously preserved in natural “deep freezers.” But when artifacts are exposed to the elements they are also no longer safe from natural decomposition.

Realizing that history was literally melting away, Taylor and his team began to focus their efforts on losing as little of that record as possible.

“As soon as we got involved, it ended up being more of a responsibility than anything else,” he says.

“My sense is that we really missed the boat on this area, in terms of the melting. Things have melted already in an extreme sense over the last decade,” Taylor says.

Watching history disappear like this is a struggle for Taylor; he describes it as “shocking and terrifying.” It’s difficult to know how to make a difference in such a rapidly changing environment.

But at higher altitudes, there’s still opportunities to save what’s left. Taylor’s team focus their efforts on mountain regions at higher latitudes, in which melting ice is only now uncovering still-preserved elements of the past. Some date as far back as the Bronze Age, some possibly even earlier.

“One thing that we can do is to get out there and do as much of this kind of work as we can, and hopefully at least take the edge off of the loss of scientific information and cultural heritage that’s going on,” Taylor says.

In interior Eurasia, high mountain zones are crucial to pastoral subsistence, providing seasonally productive pastures and abundant wild resources. In some areas of northern Mongolia, mountainous tundra zones also support a low-latitude population of domestic reindeer herders–a lifestyle whose origins are poorly characterized in the archaeological record of early Mongolia. Traditionally, reindeer pastoralists make significant seasonal use of munkh mus (eternal ice) for their domestic herds, using these features to cool heat-stressed animals and provide respite from insect harassment. In recent years, many of these features have begun to melt entirely for the first time, producing urgent threats to traditional management techniques, the viability of summer pastures, and reindeer health. The melting ice is also exposing fragile organic archaeological materials that had previously been contained in the patch. We present the results of horseback survey of ice patches in Baruun Taiga special protected area, providing the first archaeological insights from the region. Results reveal new evidence of historic tool production and wild resource use for fishing or other activities, and indicate that ice patches are likely to contain one of the few material records of premodern domestic reindeer use in Mongolia and lower Central Asia. The area’s ancient ice appears to be rapidly melting due to changing climate and warming summer temperatures, putting both cultural heritage and traditional reindeer herding at extreme risk in the years to come.