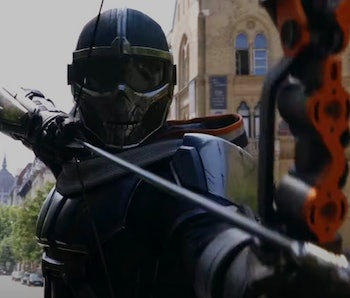 The first trailer for Marvel’s Black Widow has dropped, giving fans their first official glimpse at the mysterious Taskmaster. Though we don’t know much about this iteration of the character, the comic book villain is known for his ability to mimic other people’s powers. He’s wields a bow and arrow in the new trailer, which further fuels theories that Hawkeye will appear in the Phase Four movie.

Taskmaster’s appearance in the Black Widow trailer marks the first time he’s ever been showcased in live action. While his appearance is brief, fans immediately noticed he fights with a bow and arrow. Reddit user liftersunited argued that Taskmaster might actually be a young Clint Barton. Basically, Taskmaster would be revealed as the master archer in some capacity as a sleeper cell agent.

Hawkeye hasn’t been confirmed to appear in Black Widow, but if he does, it’s much more likely that Taskmaster encounters him at some point early on in the film, then learns his abilities to use against Natasha. They’re probably not the same character.

Taskmaster is usually portrayed as a mercenary and, while he has an arsenal of weaponry, he’s known to primarily carry a sword and a copy of Captain America’s shield, not a bow and arrow. It’s also possible that Taskmaster studied Hawkeye and the rest of the Avengers through some video and learned their abilities that way.

There’s more evidence to suggest Hawkeye might have a role to play in Black Widow. In the first Avengers movie, she tells Hawkeye “it’s like Budapest all over again.” We get no further context, so the whole incident has remained shrouded in mystery. However, back in August, set photos revealed grounded Hungarian Air Force planes and helicopters, complete with their famous bear insignia. Now, with the new trailer, we know for certain a good chunk of Black Widow does indeed take place in Budapest.

Since the timeline for Black Widow has yet to be confirmed by Kevin Feige, the possibility that Jeremy Renner will reprise his role for the film remains likely. Hawkeye’s appearance in Budapest would make a lot of sense, and explain why he and Natasha are already so close in Avengers.

Renner was one of the first to share his excitement for Black Widow on Twitter, while maintaining the appearance that he’s not involved with the production in any way. Additionally, when Scarlett Johansson was asked about a potential Renner cameo back in July, she said her “lips are sealed.” That said, if another MCU character is going to appear in Natasha’s solo outing, Hawkeye makes the most sense. Having Taskmaster copy his abilities to fight Natasha would the icing on the cake.