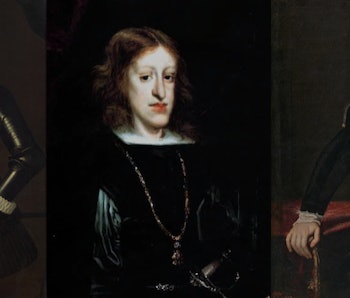 For a family that controlled assorted European territories and kingdoms for centuries, you would think that the Habsburgs would have plenty of opportunities to meet new partners. Still, they appeared to vastly prefer getting it on with each other. That Game of Thrones-style commitment to inbreeding left a visual mark that now adorns the walls of Europe’s fine art galleries.

Between the 13th century and the 20th century, this royal house ruled territories ranging from Spain to Romania. Clearly, a desire for power and control was passed down through the Habsburg lineage. However, so was an extremely distinctive jawline that’s now called the “Habsburg jaw.”

Scientists confirmed in a study released Monday in Annals of Human Biology that distinct feature was amplified due to centuries of inbreeding.

Roman Vilas, the study’s lead author, tells Inverse that this work demonstrates just how much inbreeding can affect things like infant and child survival, fertility, or life expectancy. He also notes that while it may have exacerbated the features the Habsburgs had, it’s not the sole reason the famous jaw exists.

“I would like not to contribute to spreading the idea that inbreeding is necessarily associated with deformity,” Vilas explains. “This is a prejudice that hinders our knowledge about the implications of inbreeding.”

Instead, his work shows how the genetics of inbreeding can exacerbate certain traits.

Although it has been heavily implied, we can’t say for sure that the strange Habsburg jaw was caused by their confirmed preference for inbreeding.

Why? To start with, this jaw is likely the result of many different genes, which makes it a complex trait. The question is whether those genes were dominant (which means you only need one copy of the gene for the trait to show) or recessive, which means you need two copies.

If the Habsburg jaw really was the result of inbreeding, the scientists explain that the traits would have had to have been recessive. That’s because inbreeding, as previous work shows, tends to draw out those recessive traits (particularly, harmful ones) that might otherwise disappear with intermixing.

Vilas work showed that the Habsburg jaw is no exception.

Vilas and his team analyzed 66 portraits of the Habsburgs: from Philip I who died in 1506 to Charles II who died in 1700. Then, using that family history, they calculated an inbreeding coefficient. That number is the probability that two people who have the same gene received that gene from a common relative. The higher that inbreeding coefficient, the more dysmorphic the jaws of the Habsburgs were.

For example, the inbreeding coefficient for Charles II, who reportedly had such a large tongue it was hard to understand him, was mentally disabled, and was unable to produce offspring, was .2539. That’s the highest inbreeding coefficient of all those presented in the paper. He also looked like this, going by his surviving portraits:

Taken together these results suggest that the signs of inbreeding, in some bases, do show themselves in historical faces — particularly historic royal families, for whom inbreeding was commonplace.

Vilas work suggests that the signs of inbreeding are quantifiable and he’s already looking into this for other royal families too. For instance, it’s present in the House of Bourbon, a dynasty that spawned numerous French monarchs.

The results of that inbreeding, carefully documented by unsuspecting artists, are now recorded on the pages of history for all the world to see. If you’ve ever been to the The Metropolitan Museum of Art in New York, The Prado in Madrid, or Kunsthistorisches Museum in Vienna you’ve probably seen it for yourself.

Subjects and methods: The degree of MP and maxillary deficiency (MD) of 15 members of the Habsburg dynasty was quantified through the clinical analysis of 18 dysmorphic features diagnosed from 66 portraits.

Conclusion: Both MP and MD are generally involved in the “Habsburg jaw.” The results showed a greater sensitivity to inbreeding for the lower third of the face and suggest a positive association between the “Habsburg jaw” and homozygosity and therefore a basically recessive inheritance pattern.