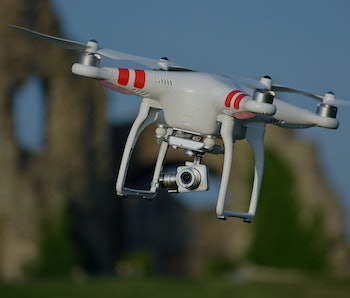 September 9 through 11 marked the 2015 InterDrone Conference, the nation’s premier annual gathering on the state of commercial drones. Technical experts, industry moguls, and plain old enthusiasts from around the country come together to talk the wondrous world of unmanned aerial vehicles. We’re highlighting some of the most interesting topics and issues that dominated the conference.

Stick a camera on a drone, and you’re bound to capture some breathtaking sights. But hand that drone over to a journalist and you’ll get a story. At least that’s the idea driving the new field of drone journalism — or “dronalism.”

The concept is pretty simple: Drones allow you to get to places you couldn’t get to otherwise. Instead of having to send a chopper and bulky cameras out to get an aerial view of a story unfolding, journalists can go aerial and peak into restricted areas. The fact that drones make privacy hard to guarantee cuts two ways. The aim of dronalists is to empower investigators to find stories by looking where they previously couldn’t get access.

Sally French is a journalist who’s made a name for herself using drones to report and tell stories. Part of the University of Missouri’s new drone journalism program, she (and her work) has appeared on a number of television outlets and become the face of a media movement. She also currently runs the blog “Drone Girl.”

At InterDrone, French taught a class on dronalism and participated in a panel discussing how media outlets can implement drones as part of their practices. Inverse spoke with French to find out just what dronalism is, and how it’s growing out from infancy into a significant part of the journalism world.

How would you define drone journalism? What does that encompass?

Drone journalism is just essentially photojournalism and you’re using a drone to take a photo. So you’re using, you know, the same camera you would always use, but it’s from some type of aerial angle. Traditionally people have used helicopters in the news for quite a while. If you put on the TV at least in my hometown station in Los Angeles, it would always have a traffic camera showing what the 405 freeways looks like. Now you can capture those shots of a traffic jam, or a fire or flood or other natural disaster with a drone, which are a lot cheaper and a lot safer.

How have drones changed the way journalists cover stories? What are some of maybe the key reasons we’re seeing them being used now more than ever?

Three years ago no one was using a drone for journalism. I was definitely one of the first. But, you know, we’ve definitely seen it more and more. CNN did a big story on the anniversary of the Selma voting rights marches. Obviously it was a huge story in the news and they used a drone to tell that story and get photos of the bridge. I think that’s an example of the use of drones in journalism where they made it very clear that they had used a drone.

So I think in the future — at least my ideal future — people will continue shooting that same footage. Shooting the cave, you know, shooting a bridge, shooting a construction site. But we won’t even need to say that it’s a drone. No new stories would say, you know, a bridge shot by a Cannon 5DMk3. It’s sort of assumed that a camera shot that photo. No one really cares that it was a Cannon or it was a drone or whatever. But at the moment, we do care that a drone shot it, which is very cool that we’re using drones for journalism. Hopefully, in the future, it will just be assumed where it came from.

What are the kinds of stories that are really optimal for using drones as a vehicle to tell the story?

That being said, there are a lot of really important stories that need to be told, that involve crowds and groups of people. A primary example of that would be a protest. There’s already been the riots in Hong Kong recently, there’s some great footage from a drone showing that. It’s a really great way to give an example of how many people are actually there often. You see a newspaper running a photo of a protest and it’s three angry people holding signs, which is, you know, a great photo, but how do we know that it wasn’t just three people there? A drone can show 50,000 people were there and that really makes a big impact that a photo from the ground just can’t show.

The technology needs to be worked out so we can safely fly over people. Until then, there’s still a lot of great stories to be told. You know, covering the drought in California and showing what the brown farm land looks like. Showing change overtime in terms of how lakes or rivers lose their water. You can show natural disasters flying over flooded areas, over fires…Of course there’s the caveat that you have to be smart about it. I know there’s a lot of bad press about drone-flying interfering with the firefighters being able to work, but if it can be done safely then I think it’s a great way to use a drone to tell a story.

What are some limitations — either technological, policy, or whatever — that you’d like to see improve in the future to makes the use of drones more optimal for journalism?

A huge one, that everyone is talking about, is legalizing drones for commercial use. For journalism right now, you can get an exemption. It’s not quite legalization though. I know a lot of people get that wrong. So commercial drone use is not legal if you have a permit, but you are exempt from it being illegal, if that makes sense. And so in order to get that exemption you have to go through a lot of requirements.