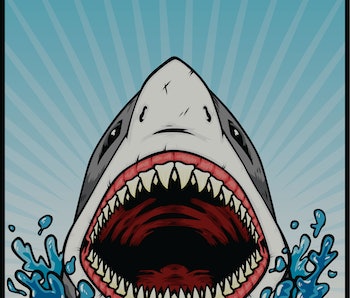 It’s very rare for a shark to bite a human, but many people are worried about sharks when they’re in the ocean. We can probably thank Jaws for that. For those who are worried about this, some new research has discovered materials that can help make a shark bite far less lethal.

Scientists at Flinders University in Australia just published research in the journal PLOS One that looks at materials which are “resistant to puncture, laceration, and bites.” These materials can be incorporated into a traditional wetsuit so that someone who’s swimming in the ocean will be less likely to bleed out after a bite, which is the main cause of death after a shark attack.

The researchers looked at two materials made of ultra-high molecular weight polyethylene fibers (UHMWPE), which they attached to wetsuit material. The good thing about these materials is they’re lightweight and malleable, since you don’t want to be wearing kevlar when you’re trying to swim around in the ocean. They tested how each material performed against simulated bites, which included puncture and laceration tests. They found these materials could significantly reduce the likelihood someone would die from a shark bite.

Charlie Huveneers, an associate professor from the Southern Shark Ecology Group at Flinders, said in a statement that the results are promising.

“Our results showed that both fabrics tested may provide some protection against shark bite and could be used as part of a shark bite mitigation strategy,” Huveneers said. “We tested the fabric on White Sharks because it is the species responsible for the most fatalities from shark bites.”

When they did tests for how well these materials could handle puncture, laceration and bites, they found the material was significantly more durable and protective compared to standard neoprene.

“More force was required to puncture the new fabrics compared to control fabrics,” Huveneers said. “Cuts made to the new fabrics were smaller and shallower than those on standard neoprene.”

While shark attacks are rare overall, there has been a noticeable rise in shark attacks in certain areas. The study points out that the “occurrence of shark bites has increased globally in the last 30 years.” In Australia, specifically, the number of annual shark bites went from 1-3 in the 1980s to 10 per year in the last decade.

Though the test was successful, Huveneers said more testing needs to be done to ensure these materials will be sufficient for saving lives in the event of a shark attack.

>Increases in the number of shark bites, along with increased media attention on sharkhuman interactions has led to growing interest in preventing injuries from shark bites through the use of personal mitigation measures. The leading cause of fatality from shark bite victims is blood loss; thus reducing haemorrhaging may provide additional time for a shark bite victim to be attended to by emergency services. Despite previous shark-proof suits being bulky and cumbersome, new technological advances in fabric has allowed the development of lightweight alternatives that can be incorporated onto traditional wetsuits. The ability for these fabrics to withstand shark bites has not been scientifically tested. In this report, we compared two types of recently developed protective fabrics that incorporated ultra-high molecular weight polyethylene (UHMWPE) fibre onto neoprene (SharkStop and ActionTX) and compared them to standard neoprene alternatives. We tested nine different fabric variants using three different tests, laboratory-based puncture and laceration tests, along with field-based trials involving white sharks Carcharodon carcharias. Field-based trials consisted of measuring C. carcharias bite force and quantifying damages to the new fabrics following a bite from 3–4 m total length C. carcharias. We found that SharkStop and ActionTX fabric variants were more resistant to puncture, laceration, and bites from C. carcharias. More force was required to puncture the new fabrics compared to control fabrics (laboratory-based tests), and cuts made to the new fabrics were smaller and shallower than those on standard neoprene for both types of test, i.e. laboratory and field tests. Our results showed that UHMWPE fibre increased the resistance of neoprene to shark bites. Although the use of UHMWPE fibre (e.g. SharkStop and ActionTX) may therefore reduce blood loss resulting from a shark bite, research is needed to assess if the reduction in damages to the fabrics extends to human tissues and decreased injuries.

More like this
Innovation
5.13.2022 11:00 AM
These robots have one special skill that could make human chefs obsolete
By Sascha Brodsky
Innovation
5.12.2022 6:00 PM
Star Wars: A robotics expert reveals the The Mandalorian's biggest flaw
By Sarah Wells
Innovation
5.12.2022 2:00 PM
Why one electric truck could tip America to renounce gas-powered cars for good
By Claire Cameron
Share: