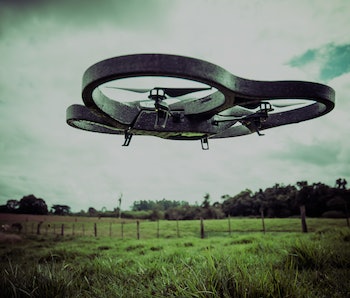 September 9 through 11 marked the 2015 InterDrone Conference, the nation’s premier annual gathering on the state of commercial drones. Technical experts, industry moguls, and plain old enthusiasts from around the country come together to talk the wondrous world of unmanned aerial vehicles. We’re highlighting some of the most interesting topics and issues that dominated the conference.

It was only a matter of time before farmers figured out how to use drones to grow and maintain their crops. Precision agriculture — using advanced tools and technologies to observe and measure conditions in the field and then respond appropriately to optimize returns and preserve resources — has greatly benefited from the advancement of unmanned aerial systems.

There is no substitute to having a bird’s-eye view of your field of foods sprouting out of the ground. The images don’t just mean really pretty pics to add to Instagram later — they can be used to fertility trends over time, determine whether irrigation adjustments should be made, capture data on climate conditions and air pollution, and watch the behavior of nearby animals.

Fourth generation farmer Robert Blair manages 1,300 acres of land in North Central Idaho. He’s been implementing precision farming practices for over a decade now. Blair was an early adopter of drones, and began using his first unmanned aerial vehicle to manage his farmland since 2006. At InterDrone, Blair taught a class on precision agriculture and participated in a panel about how farmers can integrate drones into their practices.

Inverse spoke to Blair to learn more about how exactly a farmer can use drones to help grow their crops, and what’s in store for the future of precision agriculture.

How did your interest in work in precision agriculture start?

So my interest in precision agriculture started actually back in the mid-‘90s. With the wave of computers coming on board, and John Deere launching their Green Star system, I was intrigued. It wasn’t something at that point in time that was feasible to have on the farm.

But, in 2003 is when I ended up getting my all-yield monitor, and the technology was becoming mobile and geared towards agriculture. I began working with a PDA to do simple mapping.

That lead into using aerial systems over my farm in 2004 for remote sensing. And I realized the missing piece for precision agriculture was timely aerial imagery or data. But at that time it was just aerial imagery.

Things have definitely evolved since 2004. Fast forward to 2006, I saw an ad in a publication for UAV. Called on it, purchased it, and started using it. First full season was 2007 and I have never looked back.

Can you tell me how the technology for unmanned aerial systems have progressed in the last decade? How has that affected the way you go about your operations? What are the big trends that you’ve been noticing?

Well, the biggest challenge is it takes a lot of time — to go get the data, to use the data and put it in a format that can be utilized. We’ve come a long way, and it’s gotten easier, but still there’s a lot of learning curves. Software, it’s getting there. So from a farmer’s perspective, it’s not going to be as easy as throwing one in the air and doing something with it. It’s just time-consuming. Are there going to be farmers doing it? You bet. That’s how certain farmers are, myself included. And you have to give something up. Is it family, is it volunteering, is it work on the farm down the line?

So the trends I’m seeing are those helping me understand what’s going on out in my field. There’s things that you can see from the air you cannot see from the ground, and how do you pull that data out and translate it into useful information? Granted, some of the information we get from the air and from the yield monitors — because they work in conjunction— you sometimes can’t do anything with it until the next season. Or maybe 10 years down the road when you finally get the same growing conditions. But it allows the farmer, or person in agriculture, to distill data, to make better decisions for the future.

What are still some current limitations with drone technology that you’re hoping to see improve in the next several years in order to optimize precision agriculture practices?

Definitely sensors and software. Those are our biggest limitations. And then there’s the economics of drones. If we can build something, is it going to be economically feasible to actually purchase it and use it at the ground level?

How widely adopted is the use of aerial systems in agriculture right now? Is this still just on the cusp of being noticed?

Yeah, we’re on the very beginnings of this. You’ve seen satellite imagery and manned aircraft, and UAVs are just now coming along. A lot of farmers do own UAV’s. It’s basically a toy. “Hey, this is cool!” Farmers like toys.

But as far as being utilized, we’re just at the very tip. When we take a look at precision agriculture for management decisions as a whole, you’re probably looking at 10% of the farmers doing that. Probably even less. So…there’s plenty of growth potential for agriculture.

The one thing that’s exciting for me being a farmer and being on the very beginning steps of the UAV agriculture commercial industry is the excitement there is towards agriculture form outside of our community. UAV companies, software companies, sensor companies, and other tech companies are really taking a hard, long look at agriculture that, in most instances, have been a red-headed stepchild, so to speak.

More like this
Science
12 hours ago
AI Is Smarter Than Ever – But Some Problems Still Stump Today’s Computers
By The Conversation and Jie Wang
Science
Feb. 4, 2023
Why ChatGPT Could Usher in a New Era of Scientific Discovery
By Brian Lucey, Michael Dowling and The Conversation
Gaming
Jan. 25, 2023
"Mindboggling" Launcher layoffs prompt outcry and tributes to WaPo gaming vertical
By Jess Reyes
LEARN SOMETHING NEW EVERY DAY.
Related Tags
Share: