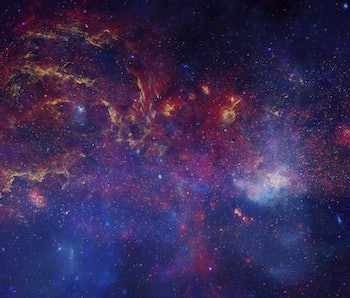 Around 13 billion years ago, our galaxy was born. In those first tumultuous years, clouds of gas and dust collapsed, producing enough energy to create the bright balls of gas which light up the night sky today.

Now, scientists have traced the history of star formation in the Milky Way, revealing a sudden spike in stellar activity 9 billion years ago. The results jibe with evidence for another origin story of the Milky Way — that our galaxy merged with a smaller, satellite galaxy during the same period.

Tracing back how and when stars formed is one of the main tools astronomers can use to understand how galaxies evolve over time, from their earliest moments to their present.

A new study uses white dwarfs — dense stars that have run out of fuel and which represent the near-death stages of medium-sized stars like our Sun — as their subjects for recreating the stellar timeline of the Milky Way.

The researchers measured the light being emitted by white dwarfs using the Canada France Imaging Survey. The survey currently includes some 25,000 stars.

From these data, the scientists found that stars began forming in the Milky Way around 11.3 billion years ago at a rapid pace, reaching a peak around 9.8 billion years ago. After that, star formation slowed dramatically for about 1 billion years before picking back up to a steady production rate that the galaxy has so far maintained.

The study is currently in preprint and under consideration for publication at the Astrophysical Journal.

The results are consistent with a 2018 study that found evidence of a merger between the Milky Way and a smaller galaxy.

Using the Gaia Space Telescope, the team behind the 2018 study located a population of older stars that preserved hints of the ancient merger. The orbits of those stars, which were out of sync with the Milky Way, were reflective of the trajectory of a galactic collision, they found.

Mergers between galaxies were more common during the early years of the universe, Ray Villard, a researcher at the Space Telescope Science Institute in Baltimore, who was not involved in the studies, tells Inverse.

“The universe was smaller and galaxies ran into each other like cars.”

Our own galaxy is part of a smaller cluster of around 30 galaxies, almost like a “small town,” Villard says. It’s a convenient place to be. “[The other galaxies] are so little that the Milky Way snacks on them,” he says.

When it isn’t being injected with renewed energy through one of these cosmic mergers, scientists believe that the Milky Way produces an average of seven stars a year.

The next step, say the researchers, is to increase the number of white dwarf stars surveyed in order to paint a better picture of the Milky Way’s infancy.

More like this
Science
5.24.2022 6:00 PM
Hubble Telescope captures rare sight of a “smiling” space object
By Doris Elín Urrutia
Science
5.17.2022 12:00 PM
We now have an image of the Milky Way’s central black hole — here’s how it happened
By Elizabeth Howell
Science
5.11.2022 8:15 PM
An ultra-bright nova hid an elusive new phenomena — but astronomers caught it in action
By Kiona Smith
Share: