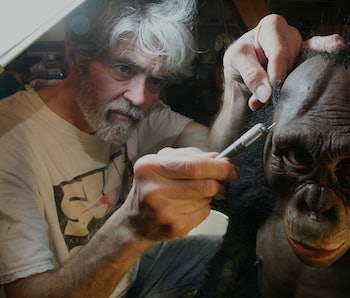 Remember that kid in elementary who would obsessively draw dinosaurs no matter what was going on in class? John Gurche was that kid. He loved paleontology. By fifth grade, he was sculpting models of a series of heads at different stages of human evolution. Today, he’s the guy National Geographic calls on to do that exact thing when, say, a new species of human ancestor is discovered. “I started doing this stuff pretty early, and I just never quit,” he tells Inverse.

Gurche is a paleoartist, which means he spends his days reconstructing prehistoric life through sculpture, paintings, and drawings. Last year when scientists found early hominid remains in a South African cave system, Gurche was brought in to start the arduous work of piecing together what the newly found species would have looked like millions of years ago.

It took about a year to construct a model bust of Homo naledi and a painting of the full body; Gurche’s work will be on the cover of next month’s National Geographic magazine. The H. naledi may be among the earliest of the genus Homo — although it has many features of modern man, its brain is smaller, like members of the earlier Australopithecus genus. The fossils have yet to be dated, but may be two or three million years old. More than 1,700 bones from at least 15 individuals of the species have been uncovered, making it an incredibly significant discovery in the search for the origins of human life.

That’s something Gurche has been interested in for a long time. “There’s something about past life and about the fact that it evolves, it can change through time, that I just find intrinsically fascinating,” he says.

“Towards the end of my teenage years, I sort of woke up to the fact that humanity is really one of the strangest phenomena that we know about. If I ask an audience, ‘What would be the strangest thing that our scientists could report discovering? Would it be something out in space, would it be something to do with black holes or quantum theory or something like that?’ My answer to that is, if astronomers discovered a portion of the universe out there that had organized and reorganized itself until it became aware, then I would say that is the strangest thing. And that’s what we are.”

Building a model of a creature’s head from a pile of bones is painstaking. Gurche spent a couple of weeks with the fossils in South Africa, working long days, drawing and taking measurements, casts, and photographs. From there he reconstructs what might have been a typical skull. Figuring out what the soft tissues would have looked like takes some imagination, but it’s not guesswork. Gurche has spent years dissecting the heads of modern humans, chimps, bonobos, gorillas, and orangutans to develop a sort of key. For example, certain measurements of the eye socket have a consistent ratio to eyeball size across different species, he explains. So by measuring the skull, he knows the size of the eye.

Such tiny measurements help Gurche glean the anatomy of a now-extinct animal. His data set for the H. naledi spanned 170 pages. He takes those little pieces and assembles them in modeling clay, building up the muscles, flesh, and skin over a cast of the skull. He has no preconception of how it will look in the end, he says.

“I’m making lots of little anatomical decisions, and I’m letting the face be the cumulative result of all of those decisions,” he says. “And it can surprise me sometimes.” The final shape becomes a mold, and a silicone head is cast. Coloring is mostly painted into the mold so that it is intrinsic to the flesh. “You can’t do anything like paint it, or it looks like a painted surface. It just doesn’t look believable,” Gurche says. Hairs are individually punched into the silicone.

Gurche has probably spent as much time contemplating the evolution of humans as anyone on the planet. We’ve still got a lot to learn, he says: “I don’t think we can confidently draw a family tree, to be honest with you.” There’s a major debate in the field about whether human evolution is a straight line or a many-branched tree, but Gurche sees something else. “I think the way it’s going to turn out in 100 years, 200 years from now — I think the way the tree will look will be like a very complex braided stream. So you have forms branching off, sometimes coming back and joining other forms genetically and sometimes not,” he says.

“It could be that once we discover the form of this braided stream and have pretty good evidence for it, that both sides will say, ‘See, I was right.’ Because the ones that were seeing everything splitting will see that there are splits, even if they come back together, and the ones that said that it was all one species at any one time will point that out that the braided stream, if it comes back together again, then they’re obviously inter-fertile, so they technically would be the same species.”

If you want to see one vision of how humans came to be, watch this teaser video for Gurche’s book, that traces 6.5 million years of facial evolution:

Gurche hopes that when people see his creations, they can visualize their ancestors as living, breathing creatures with thoughts and feelings. “I don’t want to think of them as models in museums,” he says. “I want to transcend the moment a little bit and see them as alive.”

A bust of a Neanderthal he made for the Smithsonian sports a man-bun on the top of his head, which wasn’t in fashion at the time Gurche made it. (“I was trying to distance myself from our everyday culture but now you see them everywhere. I guess maybe I started a trend, I don’t know.”)

Gurche crafted it that way to demonstrate that Neanderthals dealt in symbols, ornamented their bodies, and altered their appearances, he says. “When you look into his eyes, what I hope you’ll see is that this is a sophisticated being,” he says. “It’s somebody with a complex internal life, and it includes symbolic levels. He comes off as a thoughtful individual, and that’s what I’m aiming for.”

More like this
Science
5.11.2022 11:00 PM
Look: Missing 19th century platypus and echidna specimens discovered in museum storage
By Jennifer Walter
Culture
5.23.2022 1:00 PM
The cluttercore TikTok trend has a surprising connection to Victorian England
By Vanessa Brown and The Conversation
Innovation
10 hours ago
50 years ago, the U.S. and U.S.S.R. joined forces to ensure astronauts could survive in space
By Allie Hutchison
Related Tags
Share: