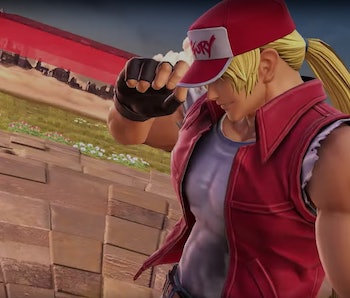 It’s been just a day since Fatal Fury’s Terry Bogard joined the likes of Mario, Link, and Samus in Super Smash Bros. Ultimate. But even in that short time, the blonde brawler has riled up the game’s lively online community and impressed many of its best players.

Twitter, Reddit, and Twitch were overflowing with Terry combo clips and hot takes about how he stacks up against the rest of the cast. It’s still early days for Smash Ultimate’s fourth DLC fighter, but the consensus against the game’s most elite players is that he has the potential to be one of the better characters in the game because of his lethality. But making the most of his abilities will take some practice.

Like Ryu and Ken, Terry has unique command inputs for all of his special moves (B button abilities) just like in Fatal Fury and King of Fighters games. While they aren’t required, pulling them off will deal substantially more damage than their standard variations. But there are two specific inputs that are mandatory to learn if you want to take your Terry play to the next level.

Once Terry reaches 100 percent or higher, players will see a flashing “Go” sign next to his character portrait. That means they now have access his two “super special moves”: Power Geyser and Buster Wolf. These deadly moves greatly increase Terry’s damage output when he’s in a bad situation, making him more of a comeback character.

Pro Smashers have already found reliable set ups to ensure these moves connect when it matters most. That has led many players to believe Terry could fall on the higher end of Smash Ultimate tier lists.

Armada: “If I had to make a guess I’d say low-high tier.”

Adam “Armada” Lindgren, one of the Five Gods of Melee, streamed some terry gameplay and then posted a YouTube video saying that he considered Terry to be “low-high tier” based on his first impressions.

“He can on-occasion kill really early. His damage output seems like it has a lot of potential, and ‘Go’ is a strong comeback mechanic,” he said. “His weaknesses are similar to Ken and Ryu, he has poor range and will probably have a hard time getting out of disadvantage.”

To top it off, Armada believes Terry’s recovery can be exploited once players get used to playing against him. That can be a detrimental against some of the best characters in the game, like Joker and Pikachu.

While Terry might not shine off-stage, Gonzalo “ZeRo” Barrios, who was ranked the best Smash 4 player of all time, believes his strength off-stage can more than make up for his weakness. But Terry players will need to practice consistently landing his super special moves.

“[Learning] the command inputs for [Terry’s] super specials are absolutely necessary,” said ZeRo in a YouTube video. “Both Power Geyser and Buster Wolf are absolutely busted. You definitely want to make sure you’re conformable with them.”

He highlighted a kill confirm combo, which he said will be core to mastering Terry. Landing an Up Tilt leads into an inescapable Power Geyser if players are able to input the command fast enough. This string will kill most of the cast at 60 percent.

Figuring out ways to reliably land Power Geyser and Buster Wolf seem to be the key to unlocking Terry’s full potential. Legendary Melee competitor William “Leffen” Hjelte said Terry will definitely struggle against combo-heavy characters, but if more super special set ups are found that could be a non-issue.

“We’ll have to find more super setups for him to be truly consistently top-tier level,” he tweeted. “Will def struggle getting out of combos and juggles but I think his recovery is fine.”

While it doesn’t seem like Terry has dethroned Joker as the best DLC fighter, it’s undeniable that the Fatal Fury protagonist has the sauce to be a real menace in Smash Ultimate.

Terry Bogard is available now as part of the $24.99 Fighter Pack or can be purchases separately for $5.99 at the Nintendo eShop.