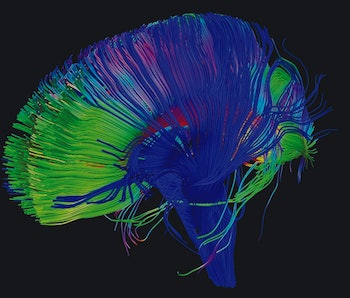 Scientists at Yale have developed a new technique for monitoring how the brain operates in real-time. Neuroscientists often capture what specific cells or circuits are doing with existing techniques for monitoring brain activity, but this technique will allow for a much broader but still detailed picture of what’s happening inside the brain.

The researchers used two-photon microscopy to capture the activity of specific neurons and mesoscopic imaging to capture how different parts of the brain were operating simultaneously. Together, they can get a full picture of what the brain is doing.

Essentially, these researchers combined two existing technologies—using a microscope to look at individual neurons and an optical imaging technique that allows you to see the entire brain—to be able to see what neurons are doing in relation to what the rest of the brain is doing. Their research was published in the journal Nature Methods.

Michael Higley, an associate professor of neuroscience at Yale and one of the authors of the study, tells Inverse their work was done by studying the brains of mice. He said it is not currently considered ethical to study human brains in this way, because it’s unclear if it’d be safe to do so.

“Basic brain architecture and function are relatively similar across all mammals, including humans and monkeys,” Higley says. “We are attempting to understand how the mouse brain works and assuming that that gives us information on how the human brain works.”

With two-photon microscopy, researchers will be able to look at how the brain operates in a new way. Neuroscientists are still trying to understand how different parts of the brain influence someone’s emotions and ways of thinking, so being able to monitor specific neurons and general brain activity at the same time could make that much easier.

Higley’s lab will also be able to research how a disease like Alzheimer’s develops in the brain.

“My lab is very interested in how brain circuits change when animals learn… and we are also looking at a couple of neurodevelopmental disease models, especially autism,” Higley says.

These researchers can take a genetic model of autism and compare the brain circuitry of a mouse that has symptoms of autism to one that does not.

Higley says his lab will next begin to start using different colors to mark different kinds of neurons in the brain to monitor brain activity. This study focused on using one color to monitor each specific area.

The more we understand about the brain, the more we’ll be able to develop medicine and therapies that will help fix problems that arise in them. Though the technology these researchers used is not new, the technique will help researchers create a fuller picture of how brains operate in real-time, which will likely lead to breakthroughs we can’t even predict yet.