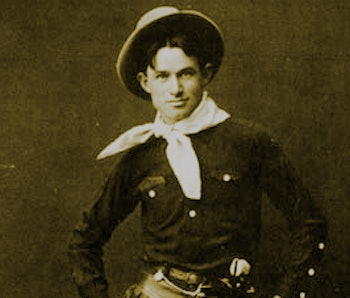 In today’s media landscape, we’re used to seeing Jacks and Janes of all trades — celebrities writing memoirs, starring in movies or expressing their 2 a.m. thoughts on Twitter. But none have been so successful as the original media darling himself, Will Rogers. Called “America’s Cowboy Philosopher,” the Oklahoma native was born on this day in 1879, and won over the hearts of the nation through humor, intellect, and a kind heart to become not only a vaudeville and silent movie star, but a newspaper columnist and radio host as well.

Rogers is the subject of Monday’s Google Doodle in honor of Native American Indian Heritage Month (Rogers himself was an American-Indian born to two Cherokee tribe members) and a lasting lesson that being a successful communicator takes a large dose of humanity — and a few dashes of humor as well.

To recognize Rogers’ talent for communication, we’ve highlighted a few of the ways this cowboy blazed new trails.

Rogers grew up in Oklahoma on a ranch where his father raised Texas longhorns, and as necessity, became a talented roper and rider. While these skills were primarily used to drive cattle to and from the range for grazing, Rogers also developed a particular affinity for rope tricks, particularly lassoing. It was this skill that caught the eyes of Vaudeville producers of the time and earned him his first spot on stage.

While the audience may have come for rope tricks, they stayed for Rogers emerging sense of gentle, “frontier humor.”

“Swinging a rope isn’t bad, as long as your neck isn’t in it,” he would say, according to the official Will Rogers site.

Rogers’ success on the vaudeville stage soon opened up opportunities for him to star in another form of emerging media: movies. A notable work, and another example of Rogers’ varied talents, was the 1922 silent film [The Ropin’ Fool whichduced and starred in.

During his film career Rogers would go on to lend his voice to up-and-coming “talkies” as well and star in more than fifty pictures, making him one of the most popular Hollywood actors of the time by 1934.

Not one to ever put all his eggs in one basket, Rogers also broke into non-visual forms of media as well and hosted a popular radio show in which he offered commentary on national events from the perspective of an average American. These opinions became particularly influential, and cherished, during the Great Depression when Rogers would offer a “jestful appraisal or jocular warning” of the day’’s events, according to his official website, according to his official website.

First appearing on the radio from Pittsburgh in 1922, Rogers continued to perform on the platform through the 20s and headlined his own Sunday radio show, “The Gulf Headliners,” in the 1930s, which was ranked among the top 15 radio shows in the country in 1935.

While Rogers is well known for contributions to the forms of media already mentioned, he is perhaps best known for his quotes and in turn his writing.

“A man that don’t love a horse,” Rogers once famously said, ”there is something the matter with him,” as well as the (perhaps) contradictory statement that “I never met a man I didn’t like.”

Rogers penned more than 3,600 newspaper columns as well as a handful of magazine articles. His writing appeared in weekly, syndicated columns across the nation as well as in the form of “Daily Telegrams” printed in the New York Times.

As with all his other forms of communication, Rogers wrote his columns with a sense of humor and human dignity that addressed modern-day issues and helped mold public opinion of the day.

Not one to let a form of media go untapped, Rogers is also known as an author as well. According to his official website, Rogers penned six titles and used this longer form of exposition of exposition to expand on political ideas expressed through his speeches and columns.