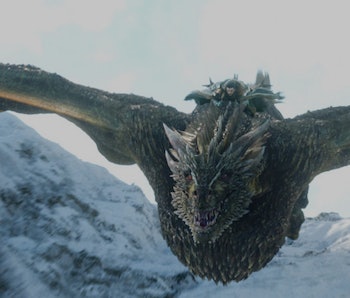 Light the funeral pyre, there’s been a death in Westeros. On Tuesday afternoon, multiple reports revealed that HBO’s planned Game of Thrones prequel, starring Naomi Watts and tentatively titled “The Long Night,” had been canceled. Inverse reached out the HBO for confirmation but the network declined to comment aside from noting that the network has not confirmed the original report from Deadline and Entertainment Weekly.

This may sound like bad news for GoT fans hungry for more, but it’s actually a step in the right direction for the future of the franchise. Here’s why.

In a word: Dragons.

Update: Proving me right, HBO announced that the network will move forward with a different Game of Thrones prequel series titled House of the Dragon, which sounds a whole lot like that Targaryen-focused show we’ve been hearing about based on the George R.R. Martin book Fire and Blood.

HBO also release a poster for House of the Dragon and the following statement (via Twitter):

The series is co-created by @GRRMSpeaking and Ryan Condal. Miguel Sapochnik will partner with Condal as showrunner and will direct the pilot and additional episodes. Condal will be writing the series.

The original article continues below.

To elaborate: By shelving the much-hyped Game of Thrones prequel set thousands of years before the events of the original series, HBO may be clearing the way for a much more interesting prequel set just a few hundred years before GoT and focused on the beginning of the decline of the Targaryen rule of Westeros. And that means… DRAGONS.

But seriously, as Entertainment Weekly notes, the only surviving Game of Thrones spin-off we know of is the Targaryen story based on George R.R. Martin’s in-universe history book, Fire and Blood. To be honest, a story about the rise and fall of the Targaryens sounds a lot more interesting than the more murky origin story that The Long Night was shaping up to be.

It’s also worth noting that with Fire and Blood, HBO has solid source material to work off of, while The Long Night would have been a looser adaptation of various bits of lore from the main books. As we saw with Game of Thrones, as soon as the source material ran out, the quality of the show began to falter. So maybe it’s best if HBO plays it safe with this first big spin-off.

For real though, there were no dragons in Westeros until the Targaryens showed up. So any show set during that time would most likely be entirely dragon-free. I don’t know about you, but that’s not a Westeros I want to live in.

On the other hand, the loss of The Long Night (or whatever it might have been called) means we’ll probably never find out what the Night King’s deal was. The series was presumably set around the same time that the original ice zombie was created by the Children of the Forest, and considering how Game of Thrones failed to explain his motivations, this was a chance for HBO to set the record straight.

Unfortunately, that likely won’t happen now. So we’ll have to go with this explanation from the actor who played the Night King, Vladimir Furdik:

“I think he’s angry; he did not want to be the Night King … The Children of the Forest, they’ve changed him, and now he’s [like], ‘Okay, you want me to be Night King? I’m going to kill you.’”

We have a feeling that George R.R. Martin and co. had something better in mind. But, for now, we’ll probably never know what it was.