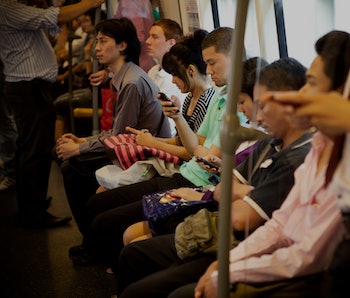 Social theorists have long said that one of the root causes of America’s class divide is that wealth insulates. And here’s some research to support the idea that the rich don’t break out of narrow social boundaries — at least on social media.

A new study of Facebook’s network data of 57 billion friendships found that even though the upper class has more resources to travel abroad and make connections internationally, they actually had fewer connections outside of the U.S. than the 99 percenters.

“The findings point to the possibility that the wealthy stay more in their own social bubble, but this is unlikely to be ultimately beneficial. If you are not engaging internationally then you will miss out on that international resource – that flow of new ideas and information,” co-author Dr. Aleksandr Spectre wrote in a University of Cambridge, statement.

An interesting twist on the data is that the wealthy do travel abroad much more frequently than any other group, yet researchers say most Facebook friendships are the result of real-world interaction, however brief. That means that traveling for the rich isn’t leading to friendships so much as it is leading to pleasant experiences. That’s nice for them, but their news feeds will remain dull.

More like this
Science
Feb. 5, 2023
AI Is Smarter Than Ever – But Some Problems Still Stump Today’s Computers
By The Conversation and Jie Wang
Culture
Feb. 4, 2023
The End of the Cold War Could Have Killed James Bond. Instead, it Made Him Stronger.
By David Grossman
Gaming
Jan. 31, 2023
How to Duel Your Friends in the Marvel Snap Battle Mode
By Joseph Yaden
LEARN SOMETHING NEW EVERY DAY.
Related Tags
Share: