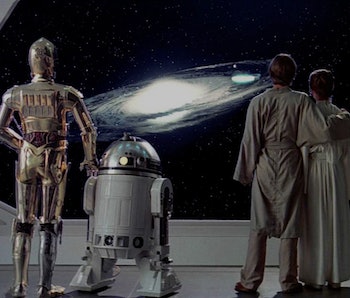 Short of George Lucas and Ralph McQuarrie you’d be hard-pressed to find a voice as crucial to shaping the world of Star Wars as Lawrence Kasdan. Even setting aside his contributions to the franchise, which include screenwriting credits on Empire, Return of the Jedi, Force Awakens, and modern thirst masterpiece Solo, he’s also responsible for writing Raiders of the Lost Ark and writing/directing Body Heat and The Big Chill. Sure, he may not have written the famously improvised, “I love you.” “I know.” exchange in Empire but his contributions to the franchise at large are untouchable, as is most of his resume outside of Star Wars (save for maybe Dream Catcher).

However, based on some quotes from an interview he gave at the recent Austin Film Festival, it would appear that Kasdan’s time in a galaxy far, far away has officially come to a close. Back when Disney first purchased the rights to the franchise and Kasdan was approached by Star Wars overseer Kathleen Kennedy about working on the new films, he told her, “[Star Wars has] been very good to me but I don’t want to do it anymore.”

This proved to be something he was willing to budge on as Kasdan would go on to help write The Force Awakens and Solo (which he likely took on due to the titular rogue being his favorite character in the series), but now, he seems much more certain in his position on working with the franchise in the future.

Kasdan noted that working on Force Awakens was something he was more or less roped into based on his eagerness to work on Solo but nonetheless said it was, “a good experience.” He agreed to officially return for Solo if he could write it with his son Jonathan, which was approved.

“Then the studio blew it,” he noted, “but that’s not unusual.”

It’s tough to say what he’s specifically referring to here, but that’s only because there are quite a few ways Disney could be said to have blown it when it comes to Solo. Perhaps Kasdan is referring to the film’s infamously troubled production schedule, which saw directors Phil Lord and Chris Miller removed from the film near the end of shooting and most of the film reshot by Ron Howard.

He could also be referring to the somewhat botched release, as the film came out just a few months after The Last Jedi, which created Star Wars fatigue for the first time in quite a while. There’s no telling what the specifics are, but it feels safe to say that his experiences on the film play no small part in his decision to step away from the franchise.

Kasdan says that while Disney has apparently made an effort to bring him back to the franchise since Solo, “I never saw that poor messenger they sent…I said, ‘I can’t take it.’ I didn’t want to sit down and read someone else’s Star Wars movie. I’m just not interested in Star Wars.” It’s about as definitive a stance as he could take and very much seems to be Kasdan formally stepping away from the franchise he helped shape.

There seems to be little malice or scorn in the decision, or on Kasdan’s take on the franchise at large. It’s far more likely that Kasdan simply wants to get back to writing and directing his own material, especially given a question as to whether or not he’d be interested in making a Marvel movie (“[I have] the perfect relationship with Marvel in that I enjoy going to their movies.”).

He’ll be back to doing original material soon with the upcoming mob drama November Road. Until then, Kasdan’s time with Star Wars may have come to a close but his contributions will live on forever.