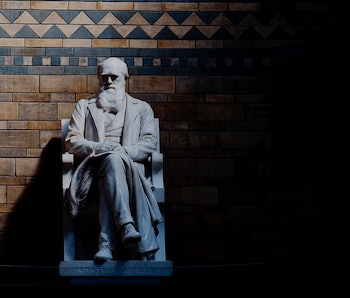 Along with providing advances in medicine and explaining physical phenomena, scientific experiments often serve as powerful metaphors for cause-effect relationships. Experiments are, after all, a bit subtler than brute-force language and make a handy shorthand for highly specific interactions. Try to eliminate science from speech and you’ll get inarticulate in a hurry.

Metaphor is language’s most powerful weapon, a tool that necessitates its own use. Below is a list of the most frequently-used science-based metaphors, the discoveries from which they draw inspiration, and some of their most common applications.

Metaphorical Function: “Darwinian” evolution describes any organism or enterprise subject to a competitive selection process. Though it is often misused to describe single subjects that transform over time, it is an apt metaphor for continuous iteration. The concept is particularly useful to describe the competitive landscape of capitalist commerce, of course, personal relationships, and everything else that occurs in stages.

Metaphorical Function: The theory that dogs can be conditioned to react to stimuli (i.e. drooling at the ringing of a bell), provides an apt metaphor for all things consumption oriented. The idea of gut reactions to stimuli is deeply embedded within marketing and design culture at this point. Not only does your brain feel super-happy when you hear a text message, the people who designed your phone knew it would.

Metaphorical Function: Copernicus’ discovery that the earth revolves around the sun instead of vice versa is a central concept in the basic structure of our galaxy. As a metaphor, it’s a useful way to describe an overly-arrogant person (“He thinks the world revolves around him”).

Metaphorical Function: Newton’s theory of gravity, boiled down to a statement as simple as “what goes up must come down,” provides a metaphor for any situation that self-corrects, and anticipates the arc of Aristotelian “riches to rags” stories. Art imitates life imitates physics.

Metaphorical Function: Aside from the fact that Einstein, himself, became a metaphor for genius, the theory that the nature of situations depends on the orientation of the observer shattered the idea of objectivity, replacing it with the notion that, at root, matter was uncertain and existed in a varying state of probabilities. The idea was so novel that it inspired the form of maybe the greatest novel ever written, “Ulysses.” The latter’s attempt to render consciousness through the prism of a character’s mind rather than through the Victorian “objective” narrator, which Joyce and other Modernist artists sought to do away with, fit hand in glove with the contemporary discovery that an “objective” grasp on an idea was elusive, an idea that predicted the discovery of…

Metaphorical Function: The Heisenberg uncertainty principle, which found that it was impossible to know an electron’s velocity and location at the same time, is often used loosely (and many would say inaccurately) to summarize any relationship or situation that is fraught with uncertainty. It is sometimes used interchangeably with Schrodinger’s Cat, a theoretical concept postulating that an animal placed in a box and gassed, and whose death is not visually verified, is, for all intents and purposes, both alive AND dead until proven otherwise. The ideas are different: One is about the inherent interference implied by measurement, the other one is about something immeasurable.

Metaphorical Function: The existence of an object so dense that nothing, not even light, can escape from it can serve as useful, if cutting, description for depression, anxiety, delusion or other malignant forms of self-absorption.

Metaphorical Function: the discovery that matter is composed of discrete particles, each one tasked with a specific function, doubles as a way to describe the organization of social structures. It also contains a healthy number of sub-metaphors, i.e. describing malignant forces within a larger body (“so-and-so is a cancer in the office.”)

Metaphorical Function: The theory that small variations in initial conditions produce widely different circumstances is a useful metaphor for speculating on the creation of different futures brought about by the smallest change in choices. It is also regarded as highly questionable by many scientists who think effects can be and probably are, for the most part, bounded. To whatever degree it can be seen as an insight into the myriad effects of any one action, it can also be seen as a lazy excuse to not document vectors. Still, it’s super useful if you want to explain a movie plot (think: Donnie Darko or Jurassic Park).