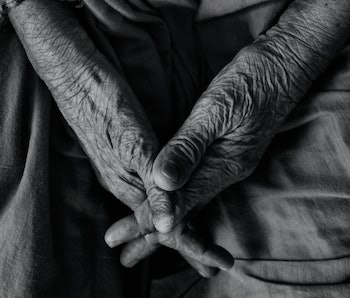 Human life expectancy has been slowly creeping up, leading to more and more really old people. Can it creep forever?

Smart people have been debating the question for a long time. Today on Reddit, Professor Stuart Kim from Stanford University is answering questions about aging. His recent research sequenced the entire genome of 17 supercentenarians (ages 110 and up).

“I am a basic scientist drawn to aging because of the scientific mystery,” writes Kim. “One thing that fascinates me is that I see no reason why human lifespan needs to be limited to ~80-100 years. Other animals such as whales, turtles and clams live hundreds of years.”

Whether or not human lifespans have a firm limit is hotly debated in the field, he says: “There are many reasons to seriously doubt that human lifespan can be extended to 200 years.” But on the other hand, some people are placing hard bets that science and technology will soon uncover the secrets of long life.

Austad’s not the only one going long on lifespan. The Palo Alto Longevity Prize has put $1 million on the line to research teams who can demonstrate dramatic increases in lifespans and heart health of lab rats and mice.

Kim’s recent research did not come up with any strong links between particular genes and longevity. But that doesn’t mean there’s no genetic basis. Studies comparing lifespans of identical versus fraternal twins have shown that our longevity is influenced about 25 percent by our genes, and 75 percent by other factors, says Kim. The genetic sequences of supercentenarians his team produced are now publicly available, so other researchers can dig in and have a closer look.

The prospect of getting really, really old can appear as a cruel sort of hell. But Kim notes that many of the people he studied lived not only really long, but really well.

“Some of the supercentenarians seem to have found a way to extend healthspan,” he wrote. “One supercentenarian practiced as a physician in Georgia until she was 103. Another supercentenarian was a stock broker on Wall Street until age 109. These people retained high mental abilities and physical strength till very late age.”

There may be a hard limit on the lifespan of humans, but there is no limit to the curiosity and resourcefulness of scientists looking to find it. Even nudging it up a bit might give you an extra decade or two of better life than you might expect.