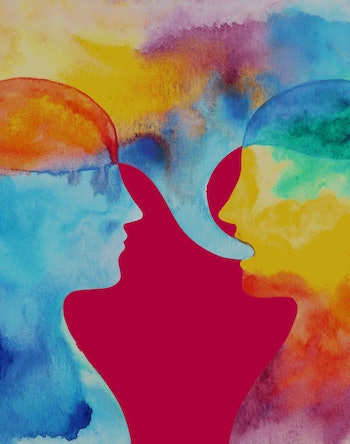 A first impression can be so powerful that it influences whether a potential employer wants to hire you, and even how much they want to pay you, scientists reported on Monday.

When you meet a new person, every detail about you sends a subtle message, right down to your sock choice. So it should come as little surprise that the way you speak plays a major role in shaping someone’s snap judgment of you — but it might not happen in the way you think it does.

It’s not just what you say, but how you say it that influences what a new person thinks of you, including your social class.

A team led by Michael Kraus, Ph.D., assistant professor of organizational behavior at Yale School of Management, shared their findings in a study published in the journal Proceedings of the National Academy of Sciences.

Here’s what they found out over five experiments, four of which examined how accurate people are when they guess at social status based on a few brief speech patterns. The fifth study, focused on people with hiring experience, sought to find out how they perceive speech patterns when judging someone’s ability to do a job.

In one experiment, Kraus and his team explored whether hearing only speech allowed strangers to identify social class accurately. When 229 people listened to 27 speakers saying seven words (“and,” “from,” “thought,” “beautiful,” “imagine,” “yellow,” and “the”), they accurately predicted the speaker’s age, gender, race, and social class more than 50 percent of the time, which is the random guess rate. Social class judgments were less accurate than judgments of the other categories.

The third looked at five men and five women on the high and low ends of the class spectrum. Perceivers were asked to listen to them pronounce “yellow,” “imagine,” and “beautiful” and think about their own preference for how those words should sound, rating the pronunciations from 0 (the worst) to 10 (perfect).

The fourth experiment asked 50 people to talk about their family history, the place where they currently lived, and how they think about their own dialect. Some 302 people listened to five random samples from that group of 50. They made more accurate predictions after hearing the speaker rather than reading an identical transcript.

In the fifth experiment, 274 participants with hiring experience listened to answers to pre-interview questions from 20 job candidates who varied in social class and were recruited from the New Haven, Connecticut, community around Yale. The 274 people rated the people from a higher social class as more qualified across several areas than those they thought were from lower social class backgrounds.

“Beyond the meaning of words and phrases, verbal speech includes linguistic data — tone, rhythm, and, importantly, variation in pronunciation — that allows a perceiver to judge speech against normative standards and to do so during the earliest moments of person perception,” write Kraus and his fellow researchers in their paper.

Pronunciation was found to be more important for determining someone’s social class than the actual information conveyed by the speaker’s words.

The researchers wanted to understand how someone’s perception of social class affected hiring decisions — and, therefore, how these split-second perceptions affect inequality in the workplace — so they selected listeners with experience as hiring managers.

Since the hiring managers are more likely to belong to a higher social class than job applicants, the team also proposed that these individuals are potentially favoring candidates who seem to belong to that same social class.

In both of these ways, they argue that this research provides strong evidence against the so-called American Dream, the idea that hard work can propel an individual into a higher socioeconomic class than the one they were born into:

The American Dream is a popular narrative in the United States. Works of fiction romanticize the idea that people determine their future success through effort, and popular media sensationalizes stories of individuals beating the odds through hard work. These fundamental meritocratic narratives contribute to the willful ignorance that Americans exhibit regarding the relative lack of actual economic mobility in society. Despite our collective optimism, social class, defined as one’s overall societal status and measured by indices of income, educational attainment, and occupation status, is remarkably stable across time and generation.

For most of the findings in the study, the effect is rather small, and in some cases just a bit better than chance. But the researchers emphasize that since these split-second perceptions play such a significant role in forming first impressions, and since these first impressions can affect employment opportunities and, therefore, a person’s social class mobility, then even that small effect could prove to be extremely important.

“Given historic economic inequality, accurate perception of social class cues, even if that accuracy is only minimally better than random chance, may be especially critical in brief interactions where early impressions crystallize,” they write.

These findings, they emphasize, highlight how important it is for companies to look inward at their hiring practices if they want to promote diversity and combat biases in the hiring process. They recommend either standardizing interviews or avoiding interviews entirely, though they warn that bias could still slip in both cases.

See also: An A.I. might also “reduce unconscious bias and promote diversity” in the workplace

“One alternative approach highlighted by the challenges identified in this work is the proactive identification of lower-status identities, based in class or race, as a deliberate tool for promoting diversity in job candidates,” the team writes.

In other words, perhaps the best way to create more diverse workplaces and help deliver on the promise of the American Dream is to intentionally seek job candidates who are different from oneself.

Economic inequality is at its highest point on record and is linked to poorer health and well-being across countries. The forces that perpetuate inequality continue to be studied, and here we examine how a person’s position within the economic hierarchy, their social class, is accurately perceived and reproduced by mundane patterns embedded in brief speech. Studies 1 through 4 examined the extent that people accurately perceive social class based on brief speech patterns. We find that brief speech spoken out of context is sufficient to allow respondents to discern the social class of speakers at levels above chance accuracy, that adherence to both digital and subjective standards for English is associated with higher perceived and actual social class of speakers, and that pronunciation cues in speech communicate social class over and above speech content. In study 5, we find that people with prior hiring experience use speech patterns in preinterview conversations to judge the fit, competence, starting salary, and signing bonus of prospective job candidates in ways that bias the process in favor of applicants of higher social class. Overall, this research provides evidence for the stratification of common speech and its role in both shaping perceiver judgments and perpetuating inequality during the briefest interactions.