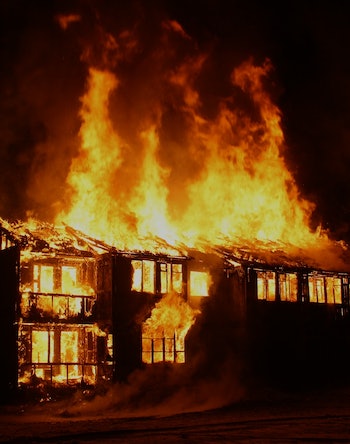 It seems like a simple enough solution: Why not just wrap houses in fire blankets during a wildfire? A new study that was just published in Frontiers in Mechanical Engineering is apparently the first to look at this idea.

The researchers tested different types of flame-resistant materials and found that existing fire blanket materials can save a house from a wildfire if it is not in an area with many other structures, and if the fire doesn’t last for an extended period. The materials they tested were aramid, fiberglass, amorphous silica, and pre-oxidized carbon. The fiberglass and amorphous silica fabrics performed best.

The researchers claim there will need to be technological advances in this area for it to be effective in places where there are many structures that are close together.

“Each year, fires in the wildland-urban interface (WUI)—the place where homes and wildlands meet or intermingle—have caused significant damage to communities. To contribute to firefighter and public safety by reducing the risk of structure ignition, fire blankets for wrapping a whole house have been investigated in the laboratory and prescribed wildland fires.” — Fumiaki Takahashi

Lead study author Dr. Fumiaki Takahashi, a professor of mechanical and aerospace engineering at Case Western Reserve University, said in a statement released with the research that more work needs to be done.

“Current technology can protect an isolated structure against a relatively short wildfire attack and further technological developments are likely to enable this method to be applied to severe situations,” Takahashi said.

Takahashi was contacted by people in areas that are prone to wildfires and asked how to best protect their homes from fires, and he decided to begin studying different options. A patent he came across led him to fire blankets.

“I thought about a means to reduce wildland fire damage and found a U.S. patent ‘conflagration-retardative curtain’ i.e., a fire blanket, issued during World War II. In addition, the U.S. Forest Service firefighters managed to save a historic forest cabin by wrapping it with their fire shelter materials,” Takahashi said.

Takahashi suggests that the home fire blanket industry could become a large one if this technology advances a little further.

“Fire blanket protection will be significant to those living and fighting fires at the Wildland-Urban Interface and presents entrepreneurs and investors with business opportunities,” Takahashi said. “The implication of the present findings is that the technical community, the general public, and the fire service must work together to take a step-by-step approach toward the successful application of this technology.”

Climate change is making wildfires more frequent and more destructive, especially on the West Coast. In order to address this issue, researchers around the country are looking into new ways to prevent these fires and to help extinguish these fires more quickly.

As we’ve previously reported, researchers at Stanford recently developed a gel-like fluid that can be sprayed on vegetation to make it less likely it’ll catch fire. This kind of research is promising and could save states like California billions of dollars every year. It may take multiple different kinds of technological solutions to help solve this serious problem.

Each year, fires in the wildland-urban interface (WUI)—the place where homes and wildlands meet or intermingle—have caused significant damage to communities. To contribute to firefighter and public safety by reducing the risk of structure ignition, fire blankets for wrapping a whole house have been investigated in the laboratory and prescribed wildland fires. The fire blankets aim to prevent structure ignition (1) by blocking firebrands to enter homes through vulnerable spots (gutters, eaves, vents, broken windows, and roofs); (2) by keeping homes from making direct contact with flames of surrounding combustibles (vegetation, mulch, etc.); and (3) by reflecting thermal radiation from a large fire within close range (adjacent burning houses or surface-to-crown forest fires) for a sustained period of time. In the laboratory experiment, two-layer thin fabric assemblies were able to block up to 92 % of the convective heat and up to 96 % of the radiation (with an aluminized surface). A series of proof-of-concept experiments were conducted by placing instrumented wooden structures, covered with different fire blankets, in various fires in ascending order of size. First, birdhouse-sized boxes were exposed to burning wood pallets in a burn room. Second, wall-and-eaves panels were exposed to prescribed fires climbing up slopes with chaparral vegetation in California. Finally, a cedar shed was placed in the passage of the prescribed head fire in the Pine Barrens in New Jersey. The experiments demonstrated both successful performance and technical limitations of thin fire blankets. The key success factors in protecting the WUI structure are (1) the fire blanket’s heat-blocking capability, (2) endurance under severe heat-exposure high-wind conditions, and (3) proper installation. Additional studies are needed in the areas of advanced material/layer development, blanket deployment methods, and multi-structure protection strategies.