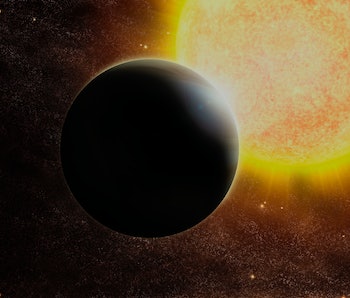 A solar system is not a safe space, especially for young, prepubescent planets still in their formation process while orbiting around a large, sun-like star with a massive gravitational pull. But what exactly keeps these feeble planets from getting too close to their host stars and becoming victims to their fatal radiation?

A group of astronomers set out to find an answer to this mystery, and they found a cosmic defense mechanism that gives infant planets a little ‘kick’ to save them from falling into the star. Their results were published Thursday in a study in the journal Astronomy and Astrophysics.

The team behind the work was first interested in the environment where planets are born, Mario Flock, Ph.D., a researcher at the Max Planck Institute for Astronomy and postdoctoral scholar at NASA’s Jet Propulsion Laboratory and the study’s first author, tells Inverse.

“Planets pile up at a certain distance,” Flock says. “It became clear that planets were formed there and are trapped at this position, which saves the young planets from falling into the stars.”

Flock’s team’s work was inspired by the discoveries made by the Kepler Space Telescope that observed a large number of planets similar to Earth orbiting their sun-like stars at a close distance.

Stars similar to our sun form from clouds of gas and dust, leaving behind a disk of leftover material from which planets form. Therefore, during the early few million years of their life, planets are surrounded by gas. If the planet should get too close to its host star, the dense gas around it interacts with the now-thinner gas around the star.

“This material gives a kick to the planet…like a ball,” Flock says. “If the planet wants to get closer, then it gets this kick and is pushed out.”

This process takes place at approximately one astronomical unit, the distance from the center of the Earth to the center of the sun — around 92.96 million miles — from the sun-like star, and during the first 10 million years of a planet’s life. Afterwards, the gas material around the planet will start dissipating and a planet will gain its final mass, at which point it is less likely to veer too close to its host star.

Another way that the study suggests a sun keeps planets out of reach is by pushing them off their orbit, and sometimes sending them flying off into space.

The team looked at these pebble-like, smaller rocks, which Flock describes as the “building blocks of planets,” and found that when these pebbles try to keep up with the fast orbit of the thin gas around a star at a distance closer than 0.1 astronomical unit, they get ejected outside of that area.

“Even if planets don’t migrate there, they can form because of these pebble traps,” Flock says. “We give the exact location where this happens.”

The recent findings have posed a question regarding our own solar system: Why don’t we have an Earth-like planet closer to the sun, in that sweet spot of planet formation?

Well, according to Flock, we may very well could have had such planet, but it was likely tossed out of the solar system during its infancy years.

“I’m very interested in that,” Flock says. “It’s still too early to say, but it’s a nice thought.”

Context: The increasing number of newly detected exoplanets at short orbital periods raises questions about their formation and migration histories. Planet formation and migration depend heavily on the structure and dynamics of protoplanetary disks. A particular puzzle that requires explanation arises from one of the key results of the Kepler mission, namely the increase in the planetary occurrence rate with orbital period up to 10 days for F, G, K and M stars.

Conclusions: Such periods are in good agreement with both the inferred location of the innermost planets in multiplanetary systems, and the break in planet occurrence rates from the Kepler sample at 10 days. In particular, models with small grains depleted produce a trap located at a 10-day orbital period, while models with a higher abundance of small grains present a trap at around a 17-day orbital period. The snow line lies at 1.6 au, near where the occurrence rate of the giant planets peaks. We conclude that the dust sublimation zone is crucial for forming close-in planets, especially when considering tightly packed super-Earth systems.

More like this
Science
5.13.2022 6:00 PM
Once a year, we get closer to NASA's Voyagers — here's why
By Elizabeth Howell
Science
5.10.2022 5:00 PM
Engage! NASA prepares the Webb Telescope camera that will find new alien worlds
By Doris Elín Urrutia
Science
5.9.2022 1:00 PM
These mass-murdering black holes can binge thousands of stars at a time
By Matt Williams and Universe Today
Related Tags
Share: