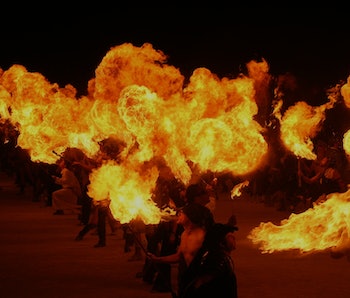 Burning Man 2015 is over, but the business world was set ablaze with speculation last week that Silicon Valley superheroes Elon Musk and Sergey Brin were scouting potential property to buy up and develop a permanent playa.

That turned out to be flat-out wrong, but the fires were stoked nonetheless. Burners want to burn. The demand for a place where people can live outside social norms and express themselves is at a local — if not an all-time — high. Which begs the question: What the hell would that look like?

To answer that question, it’s helpful to remember that the past is prelude and that collectivism and utopianism are not new American phenomena. Burning Man-style communes thrived during the ‘60s and ‘70s. And some still exist today. Here are the most relevant of the lot.

In the 1960s, a Morning Star Ranch was established in Sonoma County, California to host the significant number of young adults flocking West to participate in San Francisco’s Haight-Ashbury counterculture. Co-founder Louis Gottlieb coined the acronym LATWIDNO — Land Access To Which Is Denied No One. The ranch only existed from 1967 to 1972, but, during those few years, hippies came and went as they pleased, unencumbered by any kinds of rules. A core group of people worked to keep the place functioning while the rest of the flower children roamed the land and did as they wanted.

Perhaps one of the strangest things about Morningstar was Gottlieb’s view that it was actually a prototype for a future society where robots would do all the work and people would take part in “compulsory leisure.” Though Gottlieb and his cohort were living what was essentially a lazy agrarian lifestyle, they believed that was the future anyway. While that goes against the soft libertarianism of Burning Man, it’s also in line with the futuristic visions of technology many Burners share. A future Burning Man might exist as Gottlieb’s fully-realized experiment, where machines take care of everything and the people are left to dabble in whatever whims they have at the moment.

The Los Altos Hills commune founded in 1968, Struggle Mountain is notable for being the place where Joan Baez recorded “One Day at a Time,” while her husband David Harris was in jail, and for continuing to exist. Rather than acting as a place for transients, Struggle Mountain was a home for a massive family. People rotated in an out sometimes, but there was a fairly consistent core.

A permanent Burning Man might work similar to something like this, where on a single large plot of land, people break off into several small groups to work the land and live as a family, albeit one in which those groups could come together frequently and work with one-another engage in bigger events.

Out in British Columbia, on a 17-acre property in Tofino, 68-year old Michael Poole lets people live on his land for free and even pays them in hallucinogenic drugs. The only requirement is that visitors work for a few hours each day to help Poole move towards his sustainability goals. It’s a perfect half-way point for young travelers and hitchhikers making their way by Canada’s West Coast. Poole has been doing things this way since 1988, and it’s the way he’s doing things today.

Poole’s land offers another potential Burning Man model. It is a tourist destination of sorts perfect for group holidays, but not long-term stays. A small group manages things on a day-to-day basis, while a larger group orbits that smaller group. That is, in essence, how Burning Man works now.

Of course, all of these models assume a certain style of a 24/7 Burning Man. Other people almost certainly have much different visions for what they would want a permanent Burning Man to look like. With all the criticisms of how corporate Burning Man has become in the last few years, it might be impossible to run without sponsorship, which would be — at least to some degree — antithetical to the ethos of the thing.

Perhaps what’s needed is not a year-round Burning Man that never dies, but one that emerges reborn. Otherwise, the future of the festival might be more theme park than commune.