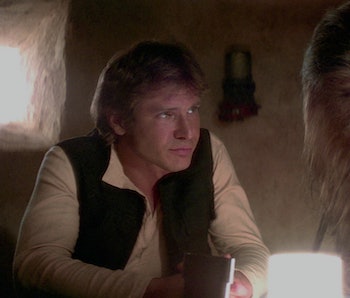 Star Wars: Force Collector is an upcoming young adult novel set just before The Force Awakens, and part of a wave of new books planned to coincide with the release of The Rise of Skywalker. It follows a Force-sensitive teenager who has visions and travels to the castle of Maz Kanata to learn how to control his abilities. We already know from Episode VII that Maz has some pretty interesting stuff locked away in her cabinet of curiosities, not the least of which is the Skywalker lightsaber that calls out to Rey. Turns out, that’s not the only precious item of Luke’s in her collection.

In a post on the Star Wars Speculation subreddit, user TheMastersSkywalker shared a rundown of what happens in the novel, which has already been released in the U.K. (The Force Collector doesn’t come out stateside until November 19, for some reason.) The redditor shares that the book’s protagonist touches Luke’s medal from after the Battle of Yavin, learning that Han gave it to Maz to “pay for a drink.” Remembering this exchange, Maz calls Han a “bastard.”

When we first met Han at Mos Eisley back in A New Hope, he didn’t give a damn about the Rebellion, he just wanted to make some money. But by the time we got to the end of Return of the Jedi, he’d become a general in the alliance, learned to say the L-word, and gave free hugs to Ewoks. This was a kinder, gentler Han Solo, who had friends and causes he cared about.

It seems that after his son became super evil and his marriage went to hell, Han went back to being a bit of an asshole. It’d be one thing if Han sold Luke’s medal because he was in a real scrape financially. That’d be unfortunate, but understandable. But to sell it just for a drink? That’s stone cold. It also hints that there’s a lot we didn’t know about Luke and Han’s relationship in the years prior to The Force Awakens.

In the films, we never get the sense that Han blamed Luke for what happened with Ben. Instead, he and Leia maintain Snoke was largely to blame. But there must have been more hostility between the former besties and brothers-in-law than we thought, if Han’s willing to toss away this reminder of a happier time — and one of their most meaningful accomplishments together — for basically nothing. (It’s also a frustrating reminder of how the sequel trilogy has rendered all their accomplishments basically meaningless, but that’s a grumble for another day.)

This scene from The Force Collector also makes us think of the only other time we’ve heard of something getting “sold for drinking money” in the Star Wars saga: when Rey’s parents abandoned her on Jakku. Sure, sleazy cantinas and watering holes are a staple of a galaxy far, far away, but it does seem like an odd coincidence.

We’re pretty sure all those old-hat “Rey is Luke’s daughter” theories aren’t true, but what if the Yavin medal this wasn’t the only precious possession of Luke’s that Han squandered in some obscure corner of the galaxy? What if young Rey Skywalker was entrusted to Uncle Han and Aunt Leia, shortly after Ben went apeshit and Luke went into exile? Then Leia dumped Han, and Han couldn’t take the constant reminder of everything he’d lost, so he left Rey on Jakku. (Yep, it probably didn’t happen this way. But it’s fun to think about.)

In any event, with Han Solo rumored to return as a Force ghost in Rise of Skywalker, hopefully we’ll get a bit more insight as to what happened between him and Luke before the story’s over.