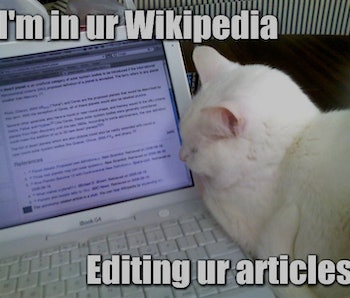 Wikipedia doesn’t exactly have the best reputation when it comes to providing reliable information about science. To help improve its standing with the science community, the online encyclopedia’s editors held the Wikipedia Science Conference in London last week, where they tried to convince researchers to take a more active role in editing content.

Not surprisingly, serious scientists scoff at Wikipedia for various reasons — the content is of poor quality to begin with, any plebe with a laptop can change it, and it can often lead to petty, time-consuming edit battles that researchers simply can’t be bothered with.

But Martin Poulter of the University of Oxford’s Bodleian Library, an organizer of the meeting, has faith in Wikipedia’s mission. As he said in an interview with Nature, “A lot of academics have the impression that because anyone can edit, that means it’s a Wild West. But Wikipedia is a community of ultra-pedants who care about facts being right.”

Wikipedia has had some success in courting the science world. The British Royal Society, for example, has a “Wikipedian in residence” who leads editing sessions to keep society-related biographies up to date. And two scientific databases, which are open to public editing via Wikipedia, have shown that scientists’ involvement in editing really does help.

“We never would have gone to the trouble of writing such detailed articles,” Alex Bateman, who co-founded the databases while at the Wellcome Trust Sanger Institute, told Nature, marveling at the effort that’s gone into keeping content accurate. “There are so many experts around the world, if you can just harness them somehow.”