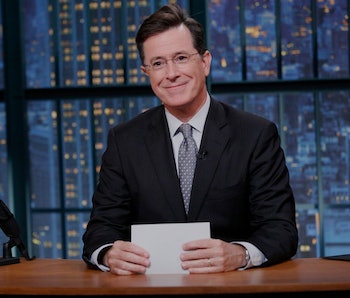 Summer belongs to the movies. Fall belongs to television. And this is a big week for the small screen for one major reason: The Late Show With Stephen Colbert finally arrives on Tuesday. That first show, which we’ll be overanalyzing on this site and in our spare time, will mark the debut of a major new CBS talk show. Except it won’t. Because even CBS is quietly admitting that Late Night With Stephen Colbert actually launched in June.

In an interview published in The Drum, a marketing industry publication, CBS Digital Media Executive Vice President and General Manager Marc DeBevoise just dropped a bit of knowledge, saying, “Colbert launched as a digital-first property this June to lead into his September premiere.” It’s a sentence worth parsing because it draws a line between debut and premiere, two words that have historically been synonyms for television programmers. And it’s a logical distinction: CBS needed to get Colbert’s new social channels up and running before the first show. Specifically, it needed to create ways for Colbert to interact with his audience and generate the beginnings of a YouTube following.

“We’re using digital as a way for the audience to get introduced to Colbert,” said DeBevoise, “in many ways it’s a marketing platform we’re able to monetize.”

That sounds a bit odd because Stephen Colbert is insanely famous and popular, but it is true that America knows him more as a caricature than as a human. CBS wants to put the human first and, more specifically, to use the human to generate clip revenue. Colbert is, in short, going head to head with Jimmy Fallon (roughly 8 million YouTube followers), who runs the clip game, and James Corden, who isn’t exactly a slouch.

Given all that, does the TV premier retain any significance? It does, but largely as a centerpiece for a further marketing push. The TV brand promotes the online brand and vice versa. Advertisers pay for eyeballs, and then other advertisers pay for the eyeballs that the people in possession of the first set of eyeballs sent over GChat to their buddies, who also have eyeballs. The machine, which was puttering along in second gear, accelerates. But, no, there really isn’t a debut this week. That happened a long time ago. Thursday is more of a “Made You Look” — and that’s fine. Stephen Colbert is delightful on any platform.