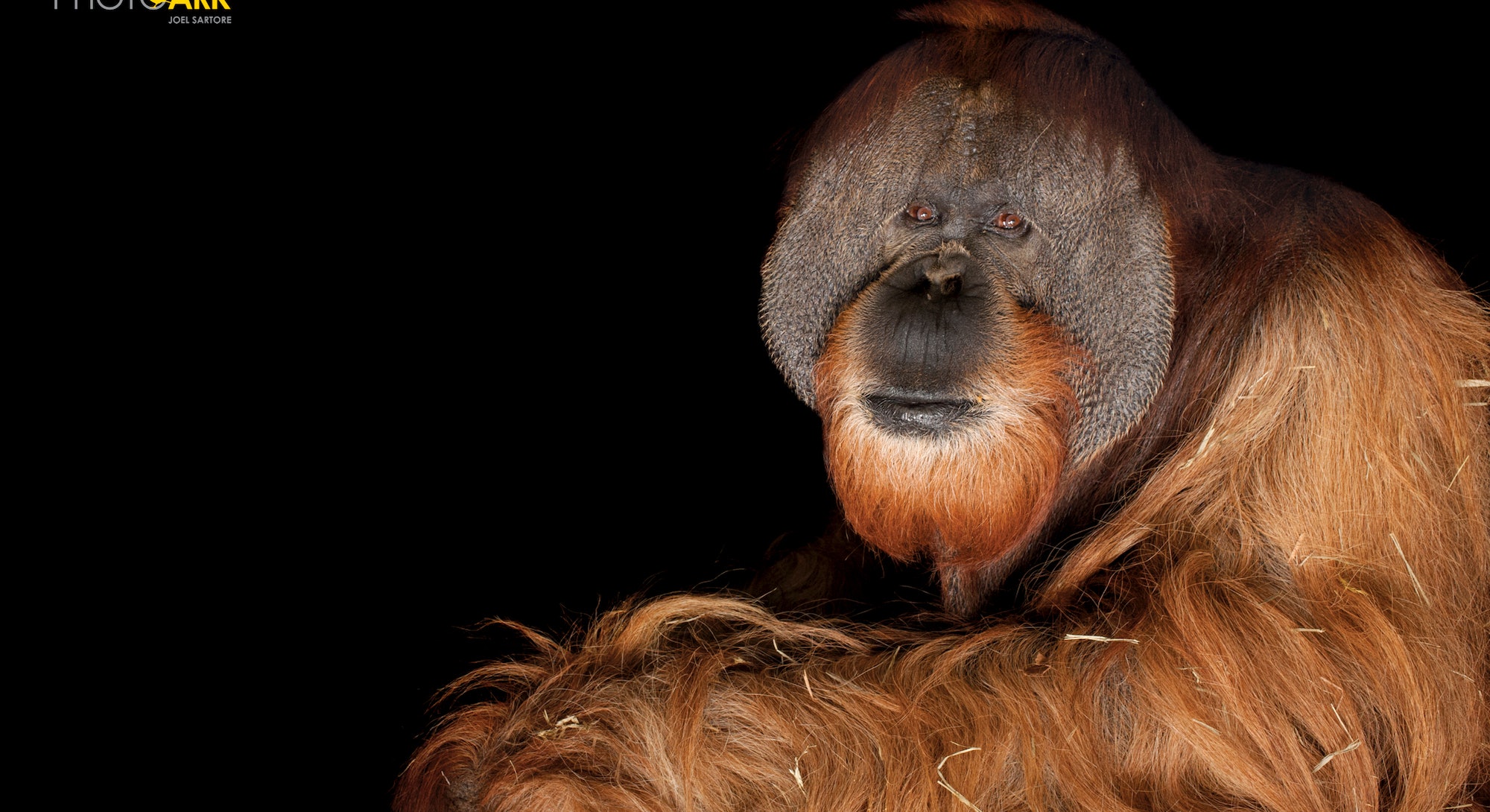 If you’re one of the 1.4 million people who follow Joel Sartore on Instagram, you’ll notice the National Geographic photographer is a prolific poster of all kinds of animals: curly-horned ibex, open-mouthed chameleons, the larvae of a dobsonfly.

He photographs each on a black or white background, part of his “Photo Ark” project, which is his mission to document every species in captivity. Sartore started the project in 2005, and he expects it to take about a dozen more years to complete. He’s published three books of his portraits. The latest, The Photo Ark Vanishing: The World’s Most Vulnerable Animals, was released this month.

The veteran photographer began his career at a newspaper in Kansas before moving to National Geographic, where he’s been documenting the animal world for more than 30 years. The first half of his tenure at the venerable publication saw him spotting lions that slept in trees in Uganda, rare birds in Mozambique, and Jaguars in Brazil.

“We just photographed whatever was coming up on the Geographic’s radar screen,” Sartore says.

But then something changed.

“My wife contracted breast cancer about 14 years ago, and I was grounded for a year, taking care of her and our kids,” Sartore tells Inverse. “She’s fine today. But during that year I had a chance to stop and think about the fact that a lot of magazine stories come and go with one month, and I wanted to do something that would stick and try to help save a lot of the species in places that I’ve been to. So that’s how this Photo Ark got started.”

Sartore takes inspiration from the work of John James Audubon, who documented every bird in North America, and whose sons helped him finish the project at the end of his life,.

“My oldest son Cole will help me finish this project if I don’t get it done,” Sartore says. “It’s anticipated to take about 25 years. I’m 57 now, I started when I was 42, and the goal is to show every species in human care around the world: at zoos, aquariums, wildlife rehab centers, captive breeders.”

His goal is really to get the public to start thinking about the extinction crisis in an effort to lessen the impact.

“We are primates, humans are; we respond greatly to eye contact,” Sartore says. “So we use portraits of animals — using as much eye contact as possible — to hopefully get people to pay attention in an entertaining, fun way.

“There’s too many distractions for people now to be depressing. We have to do things in a lively way.”

“On these backgrounds, a mouse is every bit as big as an elephant,” Sartore says.

“If we can get people in this head of conservation, then we try to teach them that we must have pollinating insects to bring us fruits and vegetables. We must have intact rainforests around the globe so that we can keep our planet cooler, and also to maintain rainfall cycles that help us grow our crops. These things really are life or death, to not just the animals in the forest and the ocean, but to people as well.”

The following is the rest of our inteview with Sartore.

What did people say when you first told them about the project? Has that changed over the years?

Well, my assistant at the time thought it was pretty foolish and not possible. My wife thought it would take me away from home a lot, which it does. I don’t know what my kids think about it too much. I think they’re proud of it.

In terms of others, people seem to be responding a lot more to this than they did when I was just shooting general pictures of animals in the field. We post these to National Geographic’s Instagram, we reach 120 million people at a time, and we can really move the needle for a lot of species and the institutions that care for them.

On Instagram, you have over a million followers on your personal account, too. Has it been a surprise that it’s reached that level?

Yeah, I am surprised, because the pictures are lot less complicated than the pictures I used to shoot. These are basically catalog images and there’s not a lot to them. But, en masse, you can literally see what biodiversity looks like — to put all the minnows together, for example, or all the rodents together. You can really see how speciation happens and how biodiversity looks.

But I guess to the public, they just like the fact that some of these animals are cute or ferocious or colorful or sad. That the animals look a lot like us, and behave a lot like us.

What have been some of your favorite animals to photograph over the years?

I always tell people that my favorite is the next one. As the guy who brings them on board the ark, I have to care as much about cockroaches as I do elephants. I have to treat them all equally, whether it’s tarantulas or some little frog that lives in a stream in Spain, or a soft fish living in marshes and estuaries in South Central America. We have to care about all of them equally. So, yeah, my favorite’s the next one.

And probably my least favorite is our chimpanzees, because they’re smart as I am — and fast and strong and aggressive. I really don’t have a thoughtful, calm portrait of one yet. I’ve tried a few times, but they always get the better of me. So maybe someday.

Why is it only animals in human care, or captivity?

Because it’s very hard to convince a tiger in India to come out of the woods to lay down on my background in front of my lights. We can’t do it that way.

We try to go to captive institutions because we know that we’ll get a great variety. We really want to show what biodiversity looks like in all its forms, and that means we have to work pretty quickly. We can’t really afford to go someplace to get one animal, waiting and waiting for it to come across my background. So we work with animals that are used to people, and we work very quickly, we can often get 40 or 50 species done in a day.

Do you have a sense of how many of your subjects have already gone extinct?

I would guess half a dozen minimum, maybe more. The Rabbs’ fringe-limbed treefrog, a little fish called the chucky madtom, the Columbia Basin pygmy rabbit. It doesn’t help my state of mind, but it also doesn’t depress me or get me to stop. In fact, it just inspires me to try and do more.

How does it feel when you know that an animal you’re photographing might become extinct?

How often do you go on trips, and who’s on your team when you travel?

I’m gone about half the year. We have six people back here in Lincoln, Nebraska, who are working on Photo Ark images. They have to keyword them, get them to Geographic, in some cases they use Photoshop: Maybe they clean up poop or dirt that’s been dragged onto the background.

In terms of travel, I’m often by myself in the US. If I’m going to a foreign country, I almost always work with other people; usually I have a guide to help figure out where to stay and to make introductions. Long in advance, we have zoo’s inventory, we can tell them what we need still and they can tell us whether it’s possible. That’s kind of it. Three 50-pound bags containing backdrop, containment tents, cameras, lights, span, tripods, that kind of thing.

You mentioned that your son helps out. Does he come with you on those bigger trips?

What specific kinds of conservation actions do you hope to inspire?

Great question. There are tons of things people can do. They can go to #SaveTogether and take a pledge to the Geographic. It won’t cost them a dime, and the Geographic will donate $5 to on-the-ground conservation efforts.

Become a member of your local zoo or aquarium, especially if they’re accredited. Zoos are the true “arks“ now, saving species. A lot of species wouldn’t even be in existence anymore if it weren’t for captive breeding programs.

And watching how we spend our money. That’s a giant deal. Your money is either tearing the world down or building it up, so you, in effect, vote every time you break out your purse or your wallet. You can buy less meat or no meat. You can quit using single-use plastic. Use public transportation. Quit putting poisons on your lawn. Quit allowing your city or town to do so as well. Voting is huge. In order to come up with sustainable solutions to, let’s say, energy supply, the public has to demand that. These really will take public outcry, and we’re just starting to see that now with the climate change movement. And it’s about time.

Most of the species in the Photo Ark can be saved; it just takes awareness and for people to study up a little bit.

No wild South China tiger has been seen for more than a decade.

You mentioned earlier that, for the trips now, you have to go farther to get fewer species. Where do you plan on going next?

Well, yeah, we’re going to go to the High Rockies in Colorado to get a pika, which is a high-altitude little mammal. It’s a lagomorph, the same family as rabbit. To live, it needs snow all winter to keep it warm. The snow acts as an insulator, so it’s a great indicator of climate change: As snow goes away at higher elevations due to warming, this animal is at risk.

And this fall we’ll likely go back to Indonesia to photograph animals like the Bornean rhino and many birds that are on the edge of extinction. Just all sorts of things that we’re hoping to document and get people to realize that these are wonderful animals. They have a basic right to exist. They’re beautiful and our world would be much more diminished without them.