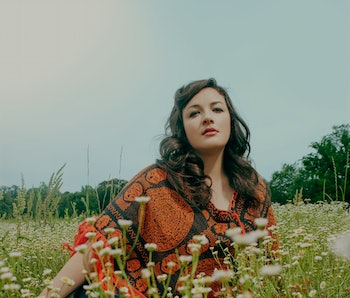 Job: Bonnie is a country musician who also composed the opera Billy Blythe about Bill Clinton’s childhood, for which she has been featured in The New Yorker and The Economist.

I’ve been taking lessons and playing ever since I can remember. My grandparents started a music store in my hometown, so they always loved for me to try to pick up. I jumped into classical music at an early age, I played piano all the time. Gospel music too — singing in the church was my first performance experience. Then by the time I started digging in and discovering myself, I really loved old rock ‘n’ roll from the ‘70s and the grunge movement. I didn’t have to seek country music out because it was everywhere growing up — but I really dove into it in my 20s. I got my higher education in music and went on to write an opera and start a country band. I definitely have more work in country music at this point in time.

Where did the idea for a Bill Clinton opera come from?

His autobiography and his mother’s autobiography really inspired me to write the opera. It’s sort of a folklore kind of story from my home state. I didn’t necessarily do it because Bill Clinton is famous; I like to read autobiographies of women from Arkansas. When I read Virginia Clinton Kelley’s autobiography, I thought the story in the book was made for the stage. There was an operatic vibe. I studied opera when I was getting my degrees, so it was the language I liked the best and felt I could write the best in.

Any idea if Bill Clinton knows about the opera? Have you met him and told him about it?

We all met Bill Clinton growing up in Arkansas. I met him I think when I was 12 at a parade, I’ve met him five or six times. I shook his hand and told him he was an inspiration. Someone told me he has a poster of it in his New York office.

Have you found it difficult to succeed in the music industry coming from a small town? Or does an urban vs. a rural background have no impact?

For me in my journey, I’ve found it’s an advantage, to come out of a completely random area to have a different perspective and be a little bit optimistic about things. It sort of helped me to come out of nowhere and throw myself into this thing. Once Billy Blythe premiered in New York I stayed for about two months and started getting a lot more work. I really learned to love New York — its such a beautiful place to have a dream realized. I don’t think I realized that everything was right here. All the people you’d need to meet, all the industry, the media — I didn’t realize. But when we first started getting attention for it, I wasn’t ready for that kind of media attention. I started getting calls from all around the world. The New York Daily News called the White Water Tavern in Little Rock. I played there all the time, and my friend who worked there gave my phone number out. I still haven’t forgiven him for that! I was completely overwhelmed, I didn’t have a synopsis ready yet.

So since you’ve experienced everything from taverns in small town Arkansas to the stages of New York, what are your favorite types of performance venues?

I have to say, the White Water Tavern in Little Rock is one of my favorite places, it’s still got a cool vibe. Also the White Horse Tavern in Austin. There’s a lot of places I’ve enjoyed playing, a lot of off-the-beaten-track honky-tonks around the country. I also love places like the Crystal Ballroom in Portland.

Do you think the current state of the music industry makes it difficult to make it a career today?

For me, that’s still a question. I think being able to sell and market your own music is such an easy way, social media provides for it, it makes it possible, but I’m still wondering that question myself.

What advice would you give to any aspiring musicians?

Of course, I’d say hard work is very important and being polite. All of that’s really important. And I’d say don’t forget your roots and don’t forget the dream that made you want to start in the beginning.

Do you think you might write a sequel to your Bill Clinton opera if he becomes our first First Man?

I don’t plan on writing another opera about Clinton unless there’s an aspect of his life that I find inspiring enough. Being the first First Man would be pretty extraordinary, though and would probably have all the elements of a good opera!

More like this
Gaming
Jan. 24, 2023
Fortnite is about to get a Wild Dreams concert from The Kid LAROI
By Jess Reyes
Entertainment
Jan. 18, 2023
Joker 2 leak reveals the movie’s surprising inspiration
By Dais Johnston
Gear
Jan. 17, 2023
Sony’s nostalgic Walkmans offer premium audio at a palatable price
By Jackson Chen
LEARN SOMETHING NEW EVERY DAY.
Share: