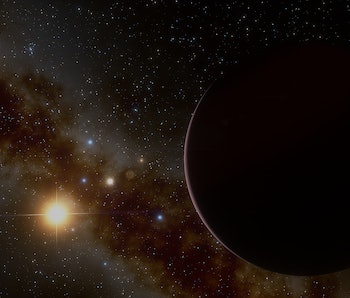 An unlikely pairing of a gas giant exoplanet and a tiny red dwarf star has scientists rethinking everything they know about how planets form — and whether there’s a whole population of large planets orbiting tiny stars that is yet to be discovered.

A team of astronomers at the Institute of Space Studies of Catalonia (IEEC) made a rare observation of a large, Jupiter-like planet orbiting around a host star that looked unusually tiny for a planet of its size. The red dwarf GJ 3512, located around 30 light-years away from Earth, is a little more than one-10th the size of our sun. Its exoplanet, on the other hand, is nearly half the mass of Jupiter, and it orbits around the dwarf star once every 204 days.

Out of the 4,000 exoplanets discovered so far in the universe, only about 10 percent of them orbit red dwarf stars. Red dwarfs are the most common type of stars, typically measuring less than 60 percent of the mass of our sun, but they are hard to see in the vast night sky due to their dimness.

The study on GJ 3512, published in Science on Thursday, shows that this particular red dwarf was exhibiting some odd behavior, moving at a faster rate than normal, which indicated that it had a rather large companion attached to it.

When the odd pair was first observed, Juan Carlos Morales, Ph.D., an astrophysicist at IEEC and lead author of the study, recalls believing that it was a case of a binary star system because of the large signals that the planetary system was giving off.

The improbable case of a gas giant orbiting such a small star challenges existing models of planet formation.

The widely accepted ‘core accretion theory’ hypothesizes that planets form from smaller particles that come together by the force of gravity, forming larger and larger particles into one massive body.

This theory explains the formation of planets like Earth, but it falls short when it comes to the formation of gaseous giants, which would need to form a lot faster to be able to contain the gases found in their atmospheres. A more recent theory, ‘disk instability,’ states that planets form when a massive disk is broken up due to instability of gravity and forms clumps of gas.

Scientists continue to debate the two theories, observing exoplanets to see which one makes more sense.

The newly discovered exoplanet GJ 5312b was likely formed when an unstable disk around the tiny star broke up into clumps.

“These clumps can grow until they form a planet,” Morales says. “This process is much faster, and larger planets can be formed. Therefore, the planet we have discovered is the first to prove that this mechanism may also work.”

The planet may not even be the only one around this tiny, tiny star. The team of astronomers also found an indication of a second planet in this unusual system, with a mass that’s three to four times that of Neptune.

“We will continue monitoring this system to characterize the second planet candidate and even look for more signals,” Morales says.

Abstract: Surveys have shown that super-Earth and Neptune-mass exoplanets are more frequent than gas giants around low-mass stars, as predicted by the core accretion theory of planet formation. We report the discovery of a giant planet around the very-low-mass star GJ 3512, as determined by optical and near-infrared radial-velocity observations. The planet has a minimum mass of 0.46 Jupiter masses, very high for such a small host star, and an eccentric 204-day orbit. Dynamical models show that the high eccentricity is most likely due to planet-planet interactions. We use simulations to demonstrate that the GJ 3512 planetary system challenges generally accepted formation theories, and that it puts constraints on the planet accretion and migration rates. Disk instabilities may be more efficient in forming planets than previously thought.