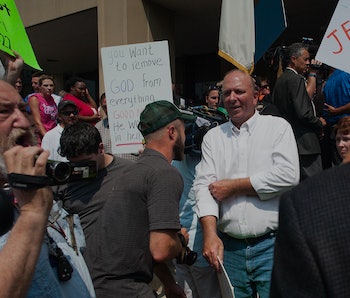 Forget, for a moment, basic Christian theology. Forget — clenching fist tightly now that Jesus surrounded himself with outcasts: lepers, prostitutes, and thieves. Forget that the entirety of Jesus’ mission can best be summed up as with John 13:34: “Love one another as I have loved you.” Forget — pounds head on desk — the Sermon on the Mount. Forget that all of this adds up to a Jesus who would be knee-deep with the marginalized of today: the poor, the sick, the displaced, the anguished.

And, you know who else? Gays, lesbians, and transgender people. Take all that and throw it out of the window — try, try really hard — when you consider the case of Kim and Joe Davis. Kim — the Rowan County, Kentucky county clerk — has been jailed because her Apostolic Christian “religious beliefs” dictated that she could not grant marriage licenses to gay couples, an iffy reading of scripture but certainly a contradiction of the Supreme Court’s landmark decision in Obergefell v. Hodges. Ever since, her husband, Tim, has been issuing inflammatory statements. But, to break wide open the Davis’ stances, you don’t even need theology. You just need basic logic.

Since his wife got locked up and the county began issuing marriage licenses, Joe Davis has taken it upon himself to be the family spokesman and, boy, is he doing some job. Earlier today, Mr. Davis held up a sign outside the county courthouse that read “Welcome to Sodom and Gomorrah” — wowzers. And he’s taking to making pronouncements that would have Jesus kick a stained-glass window. “We don’t hate nobody,” David said, according to the Lexington Herald-Leader. He then gestured to marriage-equality demonstrators and said, “We just want the same rights they have. They say, ‘We’re gonna make you accept us whether you want to or not.’ Well, we don’t want all this forced on us.” Holy — holy! — shit.

By accusing others of unjustified actions that, thus, justify his actions, Davis is rooting his logic in what’s termed tu quoque (Latin for “you, too”) fallacy. It’s the practice of avoiding a real debate and, instead, engaging with the other side through a criticism, rather than addressing their argument — fighting fire with fire, as it were. It’s a classic tactic of someone who has been disarmed. You tell your friend he cusses in front of kids too often, so he tells you your car is messy. You ask Russia to stop supporting a bloody war in Ukraine, so Russia accuses you of supporting the Arab Spring. You tell a Red Sox fan his team sucks, so he tells you the Cubs will never win a Series. You say she’s rude, so she tells you you’re fat.

What does one thing have to do with the other? Nothing. It’s just a way to tell a person you’re not listening. Like when a judge says You’re deliberately violating the 14th Amendment, and you reply, Yeah, but those guys violate things I was taught in church. It’s a smokescreen, to put it charitably.

But Davis isn’t only illogical, it’s inaccurate. “We just want the same rights they have,” flat-out doesn’t make sense. You already have those rights. That’s the point of what “they” are trying to accomplish. And, to boot, no marriage-equality advocates are championing for fewer rights for heterosexual couples. None. If Davis can find one, and hold him or her up as an example in the debate, he’s welcome to do it. I’d even have to give him credit for his research, even if we’d all have to admit that this totally fictional and non-existent person is an absolute outlier. The anti-equality faction has long held that gay marriage would be a strain on heterosexual unions — that, at the very least, they would devalue or weaken the very premise of marriage. That’s not true either, of course, but you see the desperate logic at work here.

Thank Joe Davis for this much: He has given us all a chance to reflect on one of the lesser-acknowledged ways to form a thin-gruel argument. Tu quoque. For when people justify their crimes by pointing at others. Except, they don’t.

More like this
Science
5.13.2022 3:01 PM
Can restaurant menus help diners choose climate-friendly meals?
By Tara Yarlagadda
Mind and Body
5.14.2022 11:00 AM
How to treat adult ADHD: A psychologist explains medication and more
By Laura E. Knouse and The Conversation
Mind and Body
5.10.2022 10:31 AM
Studies linking nature to better mental health focus on wealthy nations — here's why that's a huge problem
By Nick Keppler
Related Tags
Share: