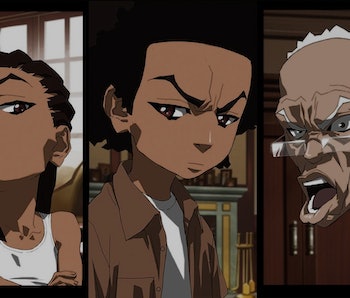 Calling a cartoon “revelatory” may come off as hyperbole, but make no mistake: Aaron MacGruder’s The Boondocks was a revelatory show when it first premiered in 2005. Based on MacGruder’s comic strip of the same name, the show dealt with hot-button issues through a unique blend of comedy and gravitas. It was an undeniable staple of the Adult Swim lineup, and the show’s legacy still runs deep despite a fourth season comeback airing in 2014 that was met with lousy reviews.

In a genuinely surprising turn of events, it was announced today that HBO Max, the company’s upcoming new streaming service, will feature two new seasons of the show beginning in 2020. The show’s return, which will contain 24 episodes in all, has been described by WarnerMedia as “reimagined” with a plot that will see the Freemans moving to the quaint suburbs of Maryland.

It all begs one question though: will it be good? Because, oh man, that last season of the show was pretty lousy, wasn’t it? Never fear, though, there’s reason to believe that The Boondocks Seasons 5 and 6 will mean a return to form.

The much-maligned fourth season of The Boondocks was produced without the involvement of series creator MacGruder. So it seems safe to say that if you watched that season and felt the spark had left, it’s because it quite literally had. It’s a fact that bodes well for the future of the series, which is being produced with MacGruder fully on board.

“There’s a unique opportunity to revisit the world of The Boondocks and do it over again for today,” MacGruder said in a statement. “It’s crazy how different the times we live in are now — both politically and culturally — more than a decade past the original series and two decades past the original newspaper comic. There’s a lot to say and it should be fun.”

MacGruder will be serving as an executive producer on The Boondocks as well as its primary showrunner. If you ask us, that’s as good a reason as any to have high hopes for the new incarnation of the show. The Boondocks will premiere with a 50-minute episode on HBO Max next year, but if you need your fix sooner, don’t worry. HBO Max has also secured the rights to all of the show’s past episodes. They’ll begin streaming on HBO Max when the platform launches next spring.

The Boondocks returns in the fall of 2020.