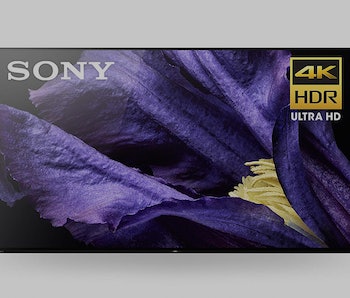 In the market for a new 4K TV to watch your favorite sports on? While it’s true that you’ll likely find a great experience on most newer TVs today, some will outshine the others. Below, we’re going to show you our top picks for best 4K TVs for watching sports.

If the question surrounds picture quality on a modern TV, the answer is likely OLED. Even with the improvements LED technology has seen, OLED is still the one to beat, hands down. Sony’s OLED TVs are a cut above the rest, including the gorgeous A9F .

Sony includes a ton of its video know-how directly into its TVs. From the Triluminos display, 4K HDR with the X1 Ultimate processor and 4K X-Reality Pro, the pictures on the A9F has to been seen to be believed.

Shipping with Android TV, the A9F has several other smarts built right into it. You can download apps from the Google Play Store and have Google Assistant or Amazon’s Alexa control your smart home with just your voice, right from your TV.

If you still want to live in the world of OLED TVs but avoid Sony’s premium price point, then the brand who popularized the screen technology in the industry is your best bet. LG’s OLED TVs are some of the best you can find and they’ve come down in price in recent years.

The LG C9 showcases the best of OLED today, offering a fantastic picture, and incredible smarts on the inside. Like Sony’s TV above it, the LG C9 allows you to use a smart assistant of your choice between Google Assistant and Alexa.

LG’s WebOS is also very easy to use and offers a wii-like remote control that’s aptly-named the Magic remote.

Just because OLED TVs offer the best picture doesn’t mean that the LED are bad in any way. In fact, LED TVs can usually get much brighter than OLED TVs, which is a very important factor in the viewing experience.

One of Sony’s best LED TVs, the X950G, offers most of every feature you could want in a 4K Smart TV today. Most of the internals found in the more expensive A9F can be found in this TV, including the X-Reality Pro, X1 Processor Ultimate, Triliminos display, and Android TV — packaged in a cheaper LED offering.

Let’s not leave Samsung out of the conversation. Responsible for some of the best TVs made today, Samsung and its QLED technology aren’t about to allow OLED TVs take all the credit for best in class picture and the QN65Q90RAFXZA shows just that.

Samsung offers a wealth of features in its TVs, such as 4K upscaling, Quantum HDR, fantastic viewing angles, and more. As far as smart features are concerned, Samsung is hardly lacking. If it’s available, Samsung probably made it available to its family of TVs.