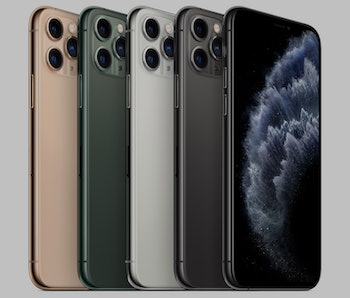 What a week it has been in the Apple core. In recent days the tech giant has released a litany of products, including new phones, watches, tablets, and more.

The big-ticket items are clearly the new iPhone 11 range. These hint at some interesting technology directions, which will most likely spread across the mobile sector.

Of course, it’s hardly radical to create a phone that is also a camera, web browser, computer, and gaming device. That idea is as old as smart phones themselves.

But Apple’s continued progression down this road raises the question of whether this trend can be sustained indefinitely, or whether there is, in fact, a limit to what the market will bear in terms of functionality, aesthetics, and cost. The new iPhones are priced from A$1,199 for the basic model up to A$2,499 for a top-spec iPhone 11 Pro Max.

In keeping with its rivals, Apple has clearly made the camera system the focus (pardon the pun) of its new iPhones. Aesthetically minded users might find the cluster of camera lenses jarring — more function than form — and doubly distressing if you’re unlucky enough to suffer trypophobia, the fear of irregularly clustered bumps or holes.

The back of the 11 Pro sports three cameras with different focal lengths. Despite still being only 12 megapixels each, in this era of filters and digital enhancements, pixel-count is no longer the crucial metric.

Each camera, including the front-facing one, can be used simultaneously. It’s now conceivable to film an entire feature-length movie on a phone (should you ever actually want to). This requires a significant amount of internal coordination to ensure that color grading and exposure blend seamlessly between these cameras, which in turn brings us to the question of computing power.

This level of highly integrated computing is one of the clearest direction changes in the iPhone lineup. It makes perfect sense from Apple’s point of view, not just because it helps to enhance performance, but because Apple controls its entire research, development, and production line anyway.

But all of this integration comes with a couple of obvious downsides for the user. One is that it’s increasingly difficult to service your own phone. The other is that for all their “multitasking” claims, it’s still only possible to do one thing at a time. One of the reasons I sound skeptical about filming feature-length movies on an iPhone is the question of what happens if you receive a phone call halfway through shooting a big scene.

What Are “Pro” Phones Really For?

Despite the “Pro” moniker, and the suggestion that they can be used to produce commercial-standard creative work, even top-end iPhones are still inherently personal devices. Of course, Apple isn’t really pitching its phones as essential kit for film directors. The actual use case is somewhat more prosaic.

The top-end price tag of A$2499 looks remarkably like laptop pricing. For professionals who do most of their work on their phone, Apple clearly thinks even this hefty price tag will represent a sensible investment for a versatile piece of kit.

Remember that mobile phones in the early 1990s were comparatively just as astounding in price, yet they sold to professionals who were busy and affluent enough to require one (or at least wanted to look as if they were).

That said, flagship phone pricing is creating a digital divide between those who insist on the latest phone and those happy to make do with an older model. As a result, the budget and mid-range phone market has become as competitive as it is varied, with fantastic handsets available for less than A$400 outright, as well as a booming secondhand market.

I always consider repairability when buying technology. I maintain my phone by replacing screens and batteries, which anyone can do with the right guidance. But many manufacturers work hard to thwart these home repair efforts.

Many phone components, including batteries, are now often “authenticated” with the phone’s central processing unit, so that should an unofficial repair occur, the device may refuse to work as intended. Sadly, users have little control over this.

If you buy a device, you should have the right to repair it. When buying a flagship phone, remember you will almost undoubtedly one day drop it on the floor, so it pays to think about how you’ll get it fixed, and whether you’re happy to play by the manufacturer’s rules.

It is clear that modern mobile devices are trying to be the “everything” device, balancing functionality with aesthetics, and even trying to take a bite out the laptop market (with a price tag to match). Premium pricing structures have been tested and appear set to stay. It seems that expensive phones bristling with high-performance cameras have become the new norm.

This article was originally published on The Conversation by Andrew Maxwell. Read the original article here.

More like this
Gear
Jan. 24, 2023
Arc browser for iPhone is bringing skeuomorphism back (kind of)
By Raymond Wong
Gear
Jan. 19, 2023
Why Apple's rumored smart display could be doomed from the start
By James Pero
Gear
Jan. 18, 2023
Apple's postponed glasses prove our AR future is further off than we thought
By Ian Carlos Campbell
LEARN SOMETHING NEW EVERY DAY.
Related Tags
Share: