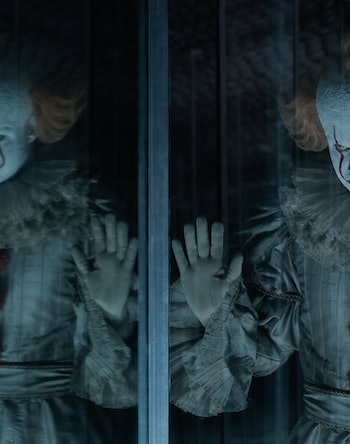 Fans of Stephen King’s seminal horror novel It may have noticed several easter eggs in It: Chapter Two when the film debuted this past weekend. There was some interesting graffiti, for instance, on the walls of Beverly’s ghoulish bathroom stall, and the kid Bill kept screaming at owned a skateboard with an Overlook hotel carpet pattern on the bottom. But eagle-eyed viewers aware of Stephen King’s larger mythology may have also noticed the return of a very important turtle.

The two most recent It films don’t actually do anything with Stephen King’s turtle deity, but they certainly nod toward his significance. In the classroom scene — you know, the one where Pennywise-Beverly’s hair catches on fire? — we see a ceramic turtle model on the unnamed teacher’s desk. This animal, of course, mirrors the LEGO turtle that appears in Georgie’s room in the first It film. It’s also a nod to Maturin, one of the pillars that support Stephen King’s quasi-religious multiverse, of which Pennywise is also a key component. But why include the turtle without the rest of the story?

Of course, Dauberman tells Inverse he wasn’t necessarily insulting the grandfather of American horror. “I think [Stephen King] has stuck the landing over and over again on many of his novels and stories,” he said, adding that “the running joke is just that, a running joke, and it speaks more to the back and forth of the arguments on the internet.” Fair enough, but even the gag isn’t meant to be an attack on King, it’s certainly an attempt at an explanation. Pennywise, according to the new It films, isn’t exactly the same character as he was in King’s novels, but just like Tom Hardy in Venom, the villain’s motivations and backstory are left up for interpretation in case other beloved characters want to make an appearance in a future, interconnected film.

You could even argue that Muschietti’s ending isn’t anymore believable than King’s, though it’s certainly more palatable. According to the movie’s logic, Pennywise can only be defeated by a chorus of people bullying it into submission. The thing is, that tactic may or may not have worked if the film had adhered closely to the story that ties Pennywise to other works like The Shining, The Dark Tower, Cujo, and Dreamcatcher. (In Dreamcatcher specifically, one character travels to the version of Derry in which Pennywise was defeated, and he sees a statue erected to honor It’s child victims.)

What Exactly Is Pennywise?

Pennywise the clown, according to Stephen King’s novels, is the chosen form of an ancient evil force motivated by something called High Random. In It: Chapter Two, this being crash lands on Earth, seemingly at random (get it?) and proves surprisingly vulnerable to the Native American ritual of Chud.

It, therefore, isn’t just Pennywise, though it does seem to enjoy taking the clown’s shape. In It: Chapter Two, we get a glimpse of a bizarre backstory, and, like Bev herself, the audience is left to decide whether the old woman in her father’s apartment actually existed. It could be that It inhabited the woman’s circus clown father, drawing inspiration for Pennywise from the man’s makeup and costume, but the entire family could also just be a fever dream It cooks up to scare Bev. Either way, sufficiently creepy.

In King’s novels, the characters go back and forth on whether It has a gender. (Fans of the 2017 film read Pennywise as queer, even shipping the demonic clown with the villain from The Babadook, though Pennywise’s homophobic ranting at Richie in Chapter Two sort of put that interpretation to bed.) Though the films refer to Pennywise as “he,” the novel lands on It actually being female, though its gender doesn’t change its purpose or behavior in any way. Male or female, High Random characters like It are just driven toward destruction and pain.

High Random characters, like their polar opposite High Purpose characters, possess a lot of energy called “ka.” In King’s world, all living things are powered by ka, which is neutral. For whatever reason, this being that chose Pennywise the clown as its corporeal form, perhaps because it’s obsessed with children. In The Shining, the Overlook hotel itself is another ancient High Random source of evil, and it chooses a friendly bartender because its target is Jack Torrance, a recovering alcoholic who promised his wife and kid he wouldn’t drink and hurt them again.

Though ka is primarily an important concept throughout the Dark Tower books, it’s also mentioned in King books including Hearts in Atlantis, Desperation, Insomnia, Rose Madder, The Tommyknockers, and The Stand. In fact, in The Tommyknockers, one character sees Pennywise in a sewer, described as “a clown with shiny silver dollar eyes.” You could even argue that characters in other novels, including Lisey’s Story and The Green Mile, can manipulate ka, though they might not know what it’s called.

The Losers’ Club, because they’re able to share knowledge with each other and feel pulled toward one another, are what’s called a ka-tet, or a group of living beings that share ka. which refers to a group of people joined by ka. Other ka-tet groups in Stephen King’s novels, brought together by forces they can’t explain, appear in Dreamcatcher, The Stand and “The Body” (aka, the short story that inspired Stand By Me).

All of this is to say, Pennywise is a High Random character attracted to the Losers because of their ka. In the films, the Losers are able to defeat Pennywise without help, but in the novel, they’re aided by a High Purpose character named Maturin, who is (you guessed it) a turtle. But, like, a giant celestial turtle with superpowers. You may be picking up on why It Chapter 2 pokes fun at how King likes to write.

How Does It: Chapter 2 Connect to Other Stephen King Stories?

Well, if you buy the idea that “ka” is Stephen King’s version of the Force, any story he’s ever told can be applied easily to that binding ideology. If King wrote a story about a haunted car (which he did, it’s called Christine), then you could say the car is an agent of High Random that’s had its ka screwed up and weaponized. If he wrote a story about a man with an intellectual disability who can see the future and communicate telepathically (again, he did, it’s called Dreamcatcher), then you could say that man has high ka.

Granted, the ka conspiracy is a bit of a wobbly connection, but tinfoil hat Stephen King obsessives were given a pretty amazing bit of affirmation via Hulu’s Castle Rock, the twisting horror series which doubled down on what fans have always suspected: that everything in King’s world is connected, and nothing is what it seems.

Will the New It Movies Tie Into Future Stephen King Adaptations?

The short answer here is: Not as far as we know. If you’re hungry for an interconnected King multiverse, well, you can always watch Castle Rock. There were also some hints at a cinematic universe in The Dark Tower, but that adaptation just happened to bomb badly enough to put plans for related installments on the back burner. And that burner, according to reports, isn’t even on simmer. It’s completely off.

Of course, the good news is that King wrote a labyrinth of interconnected mythology complex enough that writers adapting future projects can expand or constrict the web enough to meet their needs. It’s a similar approach to narrative scaffolding made popular by the Star Wars and MCU franchises, which connect characters and plot developments without boxing anyone in too tightly.

Lucky for King fans, and for fans of the horror genre in general, Pennywise isn’t likely to disappear from pop culture anytime soon. Future It adaptations notwithstanding, the proto-Pennywise in Castle Rock may make an appearance when the show’s second season hits Hulu on October 23. In the meantime, It: Chapter Two is in theaters nationwide.