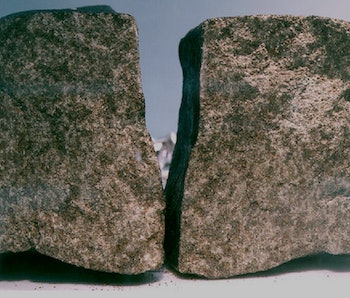 More than 100 years ago, a meteorite from Mars fell onto a small farming village in Egypt’s Nile Delta, and has held secrets from the red planet in its rocky core ever since. But through some serious space detective work, a group of scientists were able to determine that the red planet temporarily had water, just from studying meteorites that landed on Earth in 1911.

The nakhlite meteorites, named after El Nakhla, a village in the Beheira Governorate in Northern Egypt where they were first discovered, contains evidence of water activity on Mars that occured millions of years ago.

By examining pieces from two different meteorites, scientists were finally able to prove that an asteroid impact on Mars melted parts of the layer of ice beneath the planet’s surface and sent a flow of water through cracks in the rocks.

The study, published on Wednesday in the journal Science Advances, also found that the rocks must have been by asteroids twice before landing on Earth. The first impact occurred on Mars about 633 million years ago, forming the source of water on its surface. The second time an asteroid hit these rocks, about 11 million years ago, they were sent flying from Mars and into space, before they ended up on Earth in 1911. (These rocks have seen some things, man. 😦)

Luke Daly, research associate at the University of Glasgow’s School of Geographical and Earth Sciences, and lead author of the study, explains the finding this way to Inverse:

“[The study] shows quite handily that you can generate pockets of liquid water through asteroid impacts on the red planet,” Daly says. “This means you could get short- or long-lived reservoirs of liquid water all over the planet throughout the history of Mars.”

It was long believed that the source of temporary water on Mars may have been a result of an asteroid impact, but this study took a different approach to proving this theory. Rather than examining the fluid within the rocks, this group of researchers looked at the formation of the rock itself, and how the crystals deformed due to the impact, Daly says.

Scientists have been seeking answers to the mysteries of water on Mars in the ongoing quest to find life on the red planet — the target of a NASA mission set to launch in 2020. Although most of the water on Mars today is in the form of ice, some evidence suggests that ancient lakes may have existed on the Martian surface. Most recently, a study published in the journal Science in 2018 found evidence that a lake may lie beneath a layer of ice in Mars’ south pole.

Daly had originally set out to determine whether the rocks were lava flows on the Martian surface, or if they were sills, a sheet layer that forms between sedimentary rock and volcanic lava.

“It turns out answering that is much harder than I thought it had any right to be, but along the way we got this result which is way cooler,” he says.

After gathering the clues of when and how the nakhlites came to be, the team was able to roughly determine where the rocks originated from on Mars.

An area with these specifications should be easy to narrow down through satellite images of Mars’ surface, according to Daly.

By finding the location of the crater where the nakhlite meteorites originated from, Daly says it would be like finding a “master key for unlocking Mars’ secrets.”

More like this
Science
5.17.2022 11:30 AM
A skyscraper-sized asteroid is wandering toward Earth
By Brooke Edwards
Science
2 hours ago
NASA InSight shutting down and more: Understand the world through 9 images
By Robin Bea
Science
5.17.2022 8:45 PM
NASA announces the end of its Marsquake-hunting lander
By Doris Elín Urrutia
Share: