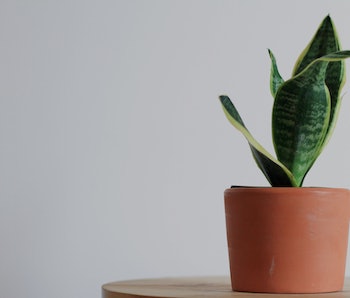 Humans have built high-rises since ancient Roman times, but it wasn’t until the 20th century that they became the default work space for a significant slice of the world’s workers. While these buildings are certainly efficient, they can cause real health issues.

Office buildings, where many people spend much of their time, are even worse than apartment buildings. Cubicles in offices usually consist of partitions made of particle board and vinyl carpet, synthetic flooring, a particle board desk and plastic or synthetic office chair, mostly lit by artificial lighting. The lucky few get natural light and a view from a window, but poor ventilation still spreads germs.

One excellent way to combat both sick days and stress is by filling your office with plants. Ideally, you want plants that will “scrub” the air of pathogens, improve the office’s mix of bacteria, and survive in low light with little care.

Fight Formaldehyde (and Other Nasty Chemicals)

One of the many chemical compounds given off by synthetic office furnishings is formaldehyde, which can irritate the mucous membranes of the eyes, nose, and throat, and also cause allergic contact dermatitis.

Irritation of the eyes and upper respiratory tract, as well as headaches, are the most common reported symptoms of exposure to formaldehyde toxins. Other harmful chemicals in the office may include benzene, ethylbenzene, toluene and xylene, and even ammonia from cleaning products. High levels of carbon dioxide breathed out by a roomful of colleagues can give the room that “stuffy” feeling, particularly if there is no air conditioning.

A NASA clean air study tested common indoor plants for the ability to filter pollutants, and found many are very effective at removing multiple kinds of organic compounds from the air. (This chart is very handy for finding high performers.)

To best remove indoor pollutants, try for one medium-sized plant per 2.2 square meters. Look for species with large leaves (the more leaf surface area, the more efficient it is).

There are already trillions of bacteria in high-rise offices, but only a limited amount come in through open windows and air conditioning from the outdoor environment. Most of the bacteria, fungi, and viruses come from people; we leave behind a microbial cloud from our skin wherever we go.

The office environment then creates new habitats for microbial communities that may be quite foreign to human skin, and may not be good for your health.

Beneficial bacteria on indoor plants and in their soil are an important addition to the office, stabilizing the ecology of the built synthetic environment.

Plant-associated bacteria could also help to avoid outbreaks of pathogens by enhancing microbial biodiversity and balancing the complex network of the ecosystem. A wholesome balance may reduce the incidence of viral illness and the number of sick days among staff.

Offices, particularly those with many people, poor ventilation, or low natural light, should also consider plants and green spaces a necessity.

There are a few basic principles for a good office plant. It must be hardy and easy to maintain, and able to survive without water over weekends (or when the regular plant-carer goes on holiday). Many plants will do the most good in cubicles and spaces away from windows, so they need to be adapted to low light.

It’s also a good idea to avoid plants that flower extravagantly, which may cause allergic reactions. Check with your colleagues before introducing new plants.

Some of the best all-rounders across these categories are Devil’s Ivy, Bamboo Palm, Kentia Palm, Variegated Snake Plant (also known as mother-in-law’s tongue), and the Peace Lily, but there are many beautiful plants that will improve your atmosphere and mood.

So if you’re heading back to work in an office soon (or know someone who is), why not bring along an indoor plant?

This article was originally published on The Conversation by Danica-Lea Larcombe. Read the original article here.

More like this
Mind and Body
Jan. 16, 2023
One daily social practice could help stave off dementia
By Elana Spivack
Mind and Body
Jan. 21, 2023
Procrastination study suggests a link to shoulder pain, bad sleep, and more
By Eva Skillgate, Alexander Rozental, Fred Johansson and The Conversation
Mind and Body
Jan. 15, 2023
The power of “non-negative” thinking
By Sarah Sloat
LEARN SOMETHING NEW EVERY DAY.
Related Tags
Share: