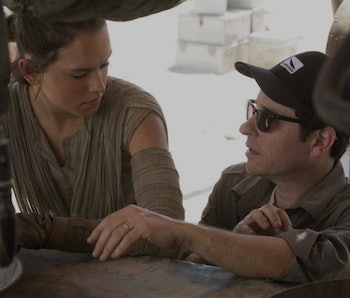 It’s been a week since Disney’s annual fan convention D23, but we’re continuing to learn more about the latest Star Wars film, the The Rise of Skywalker. In a newly released interview from the event, star Daisy Ridley confidently asserted that the ending of Episode IX won’t provoke mass outcry among fans like the final season of Game of Thrones.

Speaking to MTV News, Ridley admitted she had only watched through Season 4 of Game of Thrones, though she already knew what was coming at the end — presumably, Daenerys’ lickety-split heel turn and the startling early-round knockout of the Night King. “I think this ending will be less controversial,” she said resolutely.

She’s probably right, but that’s mostly because Season 8 of Game of Thrones wasn’t actually “controversial.” (Although some of the ensuing fan reactions, and the showrunners’ decision to no-show San Diego Comic Con at the last minute, certainly were.) Instead, it was widely criticized for being a disappointing, slapdash resolution to a complex story with a rich set of characters. The problem with the Thrones finale isn’t how it ended, but the way it got there. If Dany’s descent into madness had developed over a longer period, or the much ballyhooed Long Night had actually lasted more than a single goddamn day, the show’s conclusion would have been far more satisfying.

But really, this exchange with Ridley really isn’t about Thrones at all. The subtext here is all about reactions to The Last Jedi, which despite glowing reviews from critics, divided the Star Wars fan base. Rian Johnson’s entry in the Skywalker Saga made bold story choices, framing Luke as a dejected, walrus-milking failure in exile and (seemingly) doing away with the series’ emphasis on lineage and bloodlines, making Rey a “nobody” rather than a descendant or relative of the lead characters from the previous films. This wasn’t what people were expecting, and people either loved it or hated it. The Last Jedi is an imperfect movie in many respects, particularly the glaringly inconsequential Canto Bight plot, but Johnson likely intended for it to be unexpected, even (gasp!) controversial. It’s rare to find a Star Wars fan who doesn’t have some harsh criticisms of at least one of the mainline films, and the franchise’s legacy is far more uneven heading into its final chapter than was the case with Thrones, which had raised sky-high expectations even after a wobbly Season 7.

Post-TLJ, there’s been plenty of evidence to suggest Episode IX won’t take the same risks with beloved story elements and characters as its predecessor. The first, and most obvious clue was bringing J.J. Abrams back as director. Granted, The Force Awakens had a lot of heavy lifting to do: tying together six films and bringing us up to speed on three of the most iconic characters in pop culture, all while establishing a new threat and introducing a new generation of heroes. It managed to do all these things, but also felt like a tepid rehash of A New Hope that rendered Luke, Han and Leia’s victory in Return of the Jedi disappointingly fleeting.

Based on what we know about the film so far, Rise of Skywalker will take a similar nostalgia-tinged approach: Emperor Palpatine is back, so is Luke, and so is the Death Star (albeit as a crumbling ruin). And as fun as it’s been to speculate on the significance of “Dark Rey” in the D23 footage, that one glimpse is probably all the final film will give us of her. At this point, there’s no reason to suspect that Abrams’ finale to the Sequel Trilogy won’t be satisfying, but the evidence suggests it probably won’t be all that shocking either.