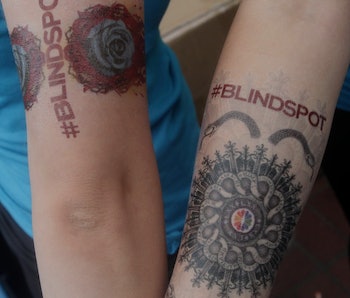 Those who know of the upcoming crime-drama Blindspot have either been inundated with NBC’s trailers for it or just encountered the show’s ridiculous subway ads. “Piecing together her past. One tattoo at a time,” they read, unbelievably. “BLINDSPOT.”

The image is a young woman (actress Jaimie Alexander of the Thor franchise and Kyle XY) displaying her bare, densely tattooed back with her face in profile. In the background, a consternated-looking man who scans like Paul from Orphan Black but is actually some other much more crusted dude (also, with a silly joke name: Sullivan Stapleton). Upon closer inspection, you’ll see that Alexander’s most prominent tat says “Kurt Weller FBI,” in the money font — by which I mean, the font you see on money. Not to spoil anything, but the crusted guy is a FBI special agent named Kurt Weller.

Previews and “first look” clips for “Blindspot” — a drama that will premiere on NBC on September 21st at 10 p.m. EST — teaches us that the drama begins with police pulling the mysterious “Jane Doe” (Alexander) out of a body bag in Times Square. The bag is tagged “Call the FBI.” She’s naked in there, and emerges looking like a walking Chinese scroll painting meets Kate Beckinsale in Underworld. She’s head-to-foot covered in tattoos — a forensics specialist clarifies that they were all done at one time in the preview.

Yes, the central mystery of the show hinges on tattoos, as you might have feared. Neither her fingerprints or DNA are in any government system, and she has no idea who she is. As Jaimie Alexander puts it in a promotional video, her extreme ink is her only key to “who she is, or who she might have been.” Other than, of course, the mysterious fact that she is trained in martial arts and other stuff only people with military training are supposed to know — hmm! Got Bourne? Oh wait, yes, we literally do; there is a promo entitled “The Female Jason Bourne”:

Imagine how freaked out Crusted Dude aka “Kurt Weller FBI” must feel when he finds his name inked on a strange nude woman in an unattended body bag outside of Dave and Buster’s or the M&Ms Store or wherever. She doesn’t know him; he doesn’t know her. A case is afoot!

“Every week we discover something different,” Stapleton puts it in the promo video. Every episode is focused on a different tat, therefore the story unfolds, literally, tat by tat, as the subway ad forewarned. As a teaser trailer foreshadows, the tats are “clues to future crimes” — maybe a different crime per episode, Murder She Wrote-style? Maybe Blindspot is the next great detective franchise, with ten times as many tats.

This show is going to be airing after Minority Report, which looks equally hilariously un-self-aware, so if you’re into crimes being predicted before they happen (or masochism), NBC will be the place to be on Monday nights. If you are then in need of more tattoo-heavy thrillers, you will get your fix next year when Fox revives Prison Break.