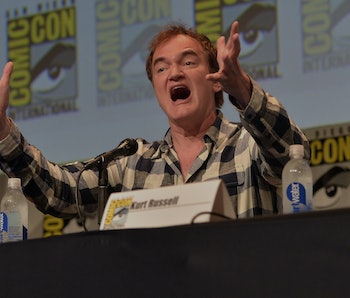 A couple of weeks back, Quentin Tarantino offered up his thoughts on the current state of cinema during an interview with Vulture. While he namechecked plenty of titles, it was his comments on Robert David Mitchell’s universally-adored chiller It Follows that generated the most feedback. Namely, his throwaway remark that while he enjoyed the film, certain technicalities prevented him from loving it. Quickly thereafter, the story — itself part of a lengthy interview — popped up everywhere, disseminated through countless websites which in turn pushed the content through their variety of social media platforms.

Everyone knew Tarantino’s opinion on the film. Now they wanted details. Vulture responded by posting the excised chunks of the conversation into a new story entitled “How Quentin Tarantino would fix It Follows.” His deeper analysis of the indie horror darling poked holes in the film’s entire villain mythology. He gets pretty specific on where Mitchell slipped up:

“He [writer-director David Robert Mitchell] could have kept his mythology straight. He broke his mythology left, right, and center. We see how the bad guys are: They’re never casual. They’re never just hanging around. They’ve always got that one look, and they always just progressively move toward you. Yet in the movie theater, the guy thinks he sees the woman in the yellow dress, and the girl goes, “What woman?” Then he realizes that it’s the follower. So he doesn’t realize it’s the follower upon just looking at her? She’s just standing in the doorway of the theater, smiling at him, and he doesn’t immediately notice her? You would think that he, of anybody, would know how to spot those things as soon as possible. We spotted them among the extras.”

“The movie keeps on doing things like that, not holding on to the rules that it sets up. Like, okay, you can shoot the bad guys in the head, but that just works for ten seconds? Well, that doesn’t make any fucking sense. What’s up with that? And then, all of a sudden, the things are aggressive and they’re picking up appliances and throwing them at people? Now they’re strategizing? That’s never been part of it before. I don’t buy that the thing is getting clever when they lower him into the pool. They’re not clever.”

Naturally, the web responded. Everyone who had an opinion on the movie now had an opinion on Tarantino’s opinion of the movie. It all got very opinionated, very fast, spreading across the web in a matter of hours through those same channels: Social media sprawl birthed a speedier, more evolved form of reader response criticism.

That arm of literary theory champions the act of consuming and deconstructing a text as a vital part of its interpretation. An example might be: you watching Game of Thrones and shouting at the TV that Arya’s attire is too binding for her to properly wield Needle. Your responses attach just as much meaning onto the show as George R.R. Martin does during the writing process. We, as gobblers of media, bring our own knowledge to those things we love and in doing so, give them purpose.

When Tarantino watched It Follows, he extracted a criticism founded on his personal reaction to it, which in turn, sparked additional reactions from others. Their initial critiques on the film were rushed into new definitions, due to the high visibility of his feedback. If it weren’t for the speedy dissemination of the information, this might not have occurred quite so quickly — or with such intrigue. Days later, Mitchell himself replied to Tarantino’s comment on Twitter, adding a third layer of interaction to the whole ordeal:

And just to make sure he didn’t upset anyone:

Critics and authors debating art in the public forum isn’t new. Film critic Roger Ebert faced resistance from the filmmakers of a torture porn horror called Chaos after he urged his readers to avoid it. The producers penned a letter addressed to Ebert and published it in the classified section of a Chicago paper, carefully taking umbrage with every one of his criticisms. He then replied, and ended up posting the whole thing on his blog. Because it’s simply easier and faster for readers to interact with texts — whether they’re movies, novels, records or even criticism — if they’re online. With a sharebar.

More like this
Entertainment
6.21.2022 12:15 PM
Ethan Hawke is an instant iconic horror villain in The Black Phone
By Eric Francisco
Entertainment
6.19.2022 11:30 AM
You need to watch the best monster thriller of the '90s before it leaves HBO Max next week
By Mónica Marie Zorrilla
Culture
6.17.2022 11:31 AM
45 years ago, the worst Exorcist sequel almost killed the franchise forever
By Jon O'Brien
Related Tags
Share: