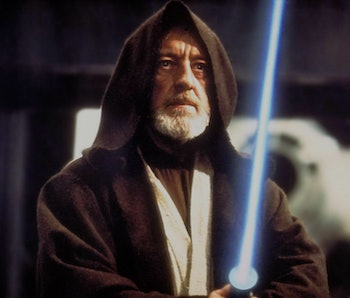 It’s been a stellar few days for Star Wars sleuths, with Disney’s D23 fan convention last weekend unveling tantalizing new details about The Rise of Skywalker. There’s a whole lot to unpack in the latest news about Episode IX, so it’s easy to overlook the inclusion of Obi-Wan Kenobi amid all the theorizing about red-eyed C3PO and Dark Side Rey. Still, D23 gave us some pretty substantial clues suggesting that fans of old Ben have more to look forward to in the coming months than Ewan McGregor’s Disney+ series.

Disney’s special look at The Rise of Skywalker, screened for D23 attendees over the weekend and released online Monday, opens with a montage from the previous eight mainline films. Obi-Wan is conspicuously prominent in this series of clips, appearing second out of all the characters, just after Luke Skywalker. Obi-Wan hasn’t really played a major part in the Sequel Trilogy thus far, even though Rey hears him speak during her vision in The Force Awakens. He’s been dead for several decades at this point in the story, and we haven’t yet seen Luke, Han or Leia mention him to the young whippersnappers. We have several reasons to suspect there’s more to his inclusion here than a mere nod to the upcoming Obi-Wan show for Disney+.

One eagle-eyed redditor, SkyGuy182, pointed out an important detail about the latest Rise of Skywalker poster. They noted that the location where Kylo and Rey fight strongly resembles the area in the first Death Star where Obi-Wan disabled the tractor beam, thus allowing the Millennium Falcon to escape in A New Hope. The once-vertical structure’s been flipped on its side and partially destroyed, but you can see the narrow walkway Obi-Wan shimmied across to get to the control panel, as well as matching rectangular panels at the bottom of the vaguely wine glass-shaped structure.

A leak from last week adds further credence to this interpretation of the poster. Ahead of D23, images circulated online of alleged upcoming Star Wars Lego sets, slated for release in early October. One of those sets featured Obi-Wan tinkering with the Death Star tractor beam. It seemed like an odd moment to memorialize with a Lego set ahead of The Rise of Skywalker, but in light of the poster imagery, it makes a bit more sense. Obi-Wan’s decision to go off on his own and disable the tractor beam enabled Luke, Han and Leia to escape and eventually bring down the Empire. Obi-Wan stops fighting back against Vader once he sees they will be able to escape; he doesn’t want to slow them down by attempting to flee with them.

The Sequel Trilogy has already drawn some links between Obi-Wan and Rey, notably her Force Awakens vision and their shared knack for Jedi “mind tricks.” This has long fueled speculation that Rey could be part of the Kenobi lineage, and knowing that we’ll find out more about what Obi-Wan was up to in the years between Revenge of the Sith and A New Hope in the upcoming Disney+ series lends a bit more heft to those theories.

What’s more, the series has yet to explore the ties between Obi-Wan and his namesake, Ben Solo. We can assume it was probably Leia who chose this name for her son. After all, she knew of “Ben Kenobi” from her adoptive father, Bail Organa, and reached out to Kenobi in A New Hope, entrusting him with the Death Star schematics. Han was somewhat less charitable in his views of Obi-Wan, describing him as an “old fossil” to Luke shortly after they first meet.

According to Variety, J.J. Abrams told fans at D23 Leia was “the heart of this story,” explaining that “we could not possibly tell the end of these nine films without Leia.” It’s hard to predict what Leia’s role in Episode IX will be, given that we know the film will rely on previously recorded footage of Carrie Fisher due to her passing in 2016. But the subtle nods to Obi-Wan scattered throughout recent promotional materials suggest that we might see a moment from Leia where she describes why they chose the name Ben, and why his sacrifice was so significant.

Rumors have also claimed Han Solo will appear in The Rise of Skywalker, either as a Force ghost or in some kind of vision to Kylo Ren. Back in April, MSW reported “several” unnamed sources had claimed Han appears to his son in “a surprise intervention of sorts,” presumably to bring Kylo back to the Light. If these rumors are accurate, we could learn more about the connection between the two Bens in this exchange, particularly given that Fisher sadly wasn’t around to record new scenes for Episode IX.

We’ll learn more about Obi-Wan’s possible role in The Rise of Skywalker when the film hits theaters on December 20.