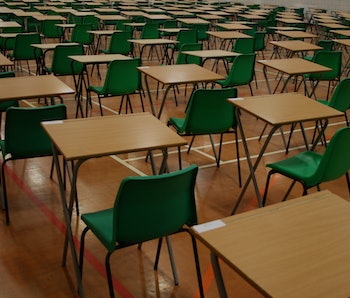 American students have hit a decade low SAT score, with an average of 1490 out of 2400. That’s a total of seven points lower compared to last year’s scores — math was down two points, writing down three, and reading down two. Although more students than ever before took the test — 1.7 million for the Class of ‘15, according to the College Board — less than half met the SAT benchmark that the College Board says translates to college-level readiness.

Educators and think-tankers are alarmed that these scores reflect the “crisis”-mode of American education, which reforms like Common Core and No Child have struggled to address. (Such standardized woes are not limited to high schools, with more would-be lawyers than ever failing the bar exam.) On the other hand, annual fluctuations are the name of the game for standardized test scores — 1.5 million students scored 3 or higher on AP exams, for instance, 100,000 more than last year.

The College Board is aware that there are problems with the SAT. The exam will get revamped next year, tweaking the math and cutting back on arcane vocab, reports the Associated Press; the changes will make the SAT more closely resemble the ACT, which is growing in popularity. But standardized tests will need further reform, critics say, to address the influence of income inequality on scores.

If Hollywood taught us anything — and we have to get ethical life lessons from somewhere — if you bomb standardized tests so atrociously you need to steal it, you have a one-in-three chance of becoming an Avenger. Those are some statistics America can get behind.

More like this
Science
23 hours ago
JWST will unlock the mysteries of these 7 peculiar exoplanets
By Jennifer Walter
Science
22 hours ago
NASA’s CAPSTONE Mission Is On Its Way to the Moon
By Kiona Smith
Science
21 hours ago
Webb Telescope will take aim at one of Hubble's most iconic targets
By Georgina Torbet
Share: