The other evening on Last Week Tonight, John Oliver got in on the Guy Fieri hate game, comparing him to Vladimir Putin. 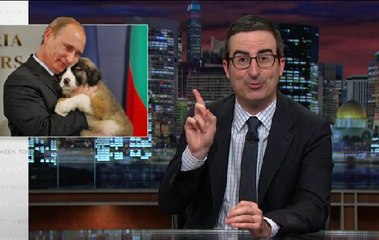 He’s just the latest to serve the frosted-tipped host of Diners, Drive-Ins and Dives. Fieri is a regular target of the comedian and haughty classes, and was most-famously burnt to a crisp by New York Times food critic Pete Wells. (He’s even recently been called out for the Food Network’s shoddy programming.) Stop the madness! Guy Fieri is awesome. Here’s why:

Triple-D checks out the righteous places

They might not be Michelin-starred, but Fieri’s picks are almost always a dope choice. Sometimes they’re off-the-beaten-path, other times they are complete holes. But, all of them share a dedication to ingredient-based homestyle-cooking. Just as a for instance, he and his producers constantly choose killer spots in my hometown of Denver. He gave daps to the best pizza slice in town and recently checked out bomb Greek joint, Axios. “Bomb Greek joint” is something Guy Fieri would say. I’m even talking like him now.

And I’ve been to some of the spots he’s visited in other states — I don’t usually seek them out like some people. But, they are usually solid as a rock. From Kuma’s Corner in Chicago to Jimmy’s Diner in Brooklyn, I can — anecdotally, at least — say that DDD is scouting out delicious spots.

Fieri is an everyman

I know that sometimes being an Average Joe is not what you’re looking for: like, say, with presidents. (Suck one, William F. Buckley.) But, with hosts of TV shows based on eating hamburgers? Hell yes. Fieri is goofy, cheesy, and then some, but you get the vibe that he’s a nice guy who loves what he’s doing. And he’s picking affordable, local restaurants that people can actually try. As much as we’d all love to dine nightly at one of The New York Times’ four-star restaurants, they are all obscenely expensive. How do you like them apples, Pete Wells? Probably cooked sous-vide and then floated on foam or some shit.

Alright, alright. I’m not gonna go into a whole thing about how, in these negative and trying times, we need more people who are unabashedly cheerful. Nevermind, actually I am. Fieri loves the places he goes, the people he meets, and the food he’s eating. He’s always finding some over-the-top flavor explosion in each dish. “The vinegar gives it a nice, cutting balance,” he might say, taking a shot in the dark. Or, he will often utter words along the lines of: “This is top eleven vegetarian bánh mìs in Michigan, for me.” He might not know a ton about French cooking techniques or even what’s in mustard, but nobody ever said he was a food critic — least of all him.

That Wells review wasn’t even that well-written or funny

Shit was overrated, straight up. That’s right, Wells: I’m back on you. Take it easy on Guy, people. Let’s all hold hands, eat some greasy food, and get diabetes together.

More like this
Science
November 23, 2022
How Newtonian physics can help make the perfect mashed potatoes
By Madeline Muzzi
Mind and Body
Dec. 5, 2022
How much salt is too much? Heart health study has a new answer
By Elana Spivack
Mind and Body
November 26, 2022
To eat your recommended fruit and veg every day, try this one simple hack
By The Conversation and Kirsty Hunter
Related Tags
Share: