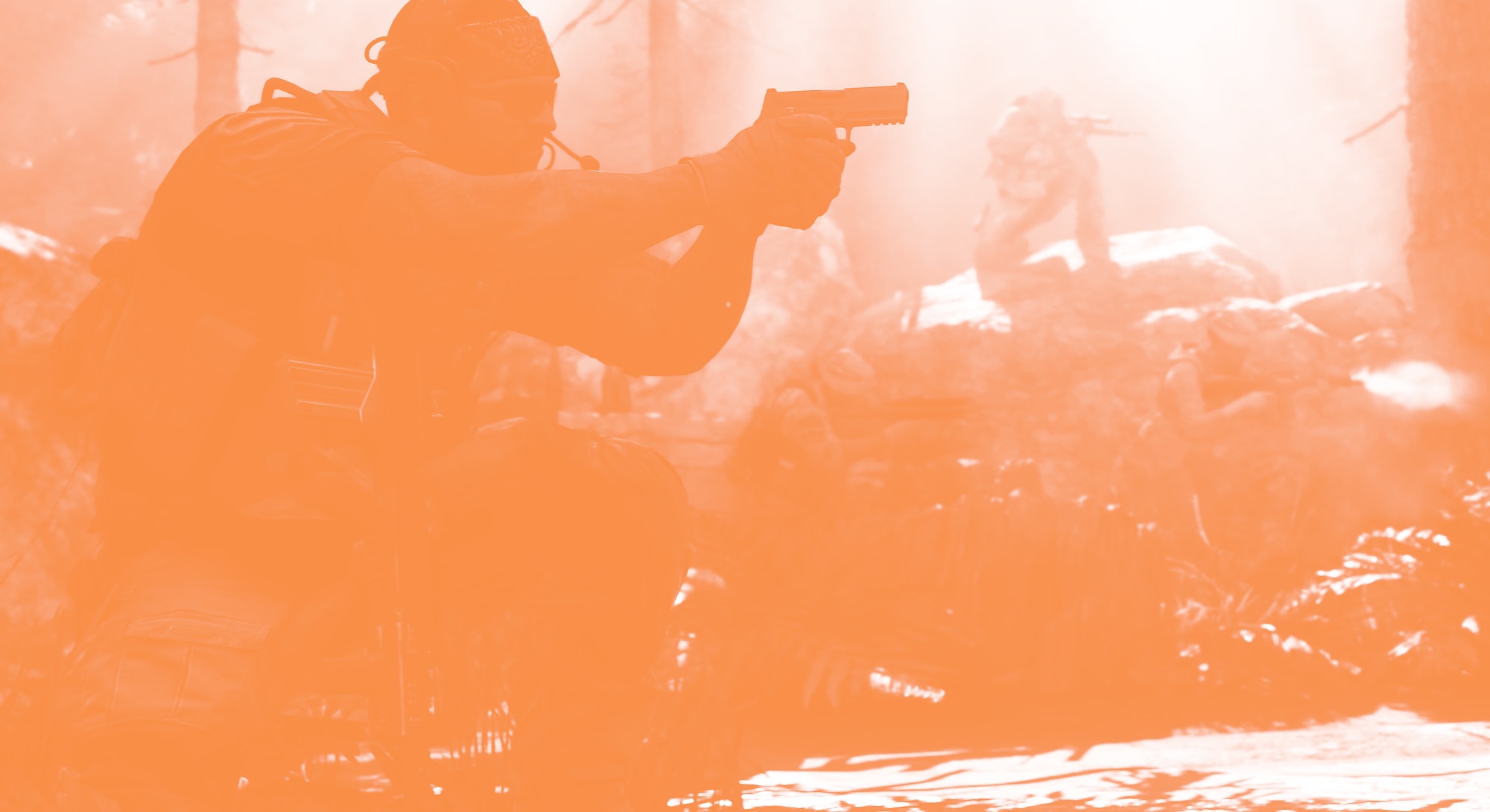 Call of Duty has always been known as the first-person shooter that prizes realistic warfare above all else. It’s the workhorse of the video game industry, putting out a new game every year with incremental changes and raking in cash for its publisher Activision, but with Call of Duty: Modern Warfare out this fall, original franchise developer Infinity Ward takes a huge leap forward in terms of hyper-realism, skipping the tricks most FPS games use to give the illusion of warfare, instead offering an experience that goes beyond realism.

Most similar video games use artificially engineered sound and visual approximations for ballistics to make it feel like you’re firing a weapon. It’s a carefully manicured illusion meant to trick you with an immersive experience. You overload the senses with just enough visual, auditory, and even tactile sensations that the player forgets it’s a game.

But from recording the sounds of real weapons on a Hollywood stage to reworking the way bullets fly and casings bounce, Call of Duty: Modern Warfare takes big strides to shatter the typical video game illusion. It also helps that rather than recycling the same engine, Modern Warfare was rebuilt with a new system that looks more advanced than any previous entry.

The closest comparison isn’t any other video game, it’s a live-action war movie. At a preview event in July, Infinity Ward Studio Art Director Joel Emslie tells Inverse that the line between those two genres is blurring, and Modern Warfare is at the forefront of that evolution.

“The line between the film industry in the games industry is really starting to blur,” Infinity Ward Emslie says Inverse. “We’re getting a lot of talent back and forth.”

In conversations with both Emslie and Audio Director Stephen Miller about Call of Duty’s future and what Modern Warfare has in store, Inverse learned how Infinity Ward is pushing the franchise further than ever before. Here are some of the ways that the new entry will ratchet up the hyper-realism.

3D Scanning Technology Changed How Call of Duty Is Made

A big part of what makes 2019’s Modern Warfare so visually sophisticated is the 3D scanner technology Infinity Warn used to essentially teleport weapons and various items into the game. From a design standpoint, the first step then becomes creating a real-life representation of something to scan.

“The team went from being digital artists, doing everything with a computer, to now becoming what’s essentially prop artists, like what you’d do in film,” Miller says.

“We have a materials team that created a domed rig with LEDs, and they use it to measure the luminosity of the material,” Emslie adds. “Then they plug it into a custom live materials library.”

Every game does this on some level, but in Call of Duty: Modern Warfare, it’s all in the service of making each weapon and piece of gear look as realistic as possible. With this technology, Infinity Ward can scan almost anything, import it into the database, and then suddenly it’s a new way to customize an item in Modern Warfare. In some cases, like the Juggernaut armor (which doesn’t exist in real life), it was designed in miniature form the size of a G.I. Joe doll before being scanned.

Recently, Emslie even encountered a coworker carrying a real crawdad, dripping wet from having been in the freezer.

“Earlier this week, I was walking down the hallway,” Emslie said, “and was like, ‘Why are you carrying a crawdad? What’s that for, dude?’ He just said, ‘Charm, bro! I’m going to go scan it!’”

In addition to the many standard attachments like clips or muzzles, weapons will also have a myriad of cosmetic ways players can customize them called “charms.” So when Call of Duty: Modern Warfare ships, that’ll also include a small crawdad keychain.

We still don’t know how Call of Duty: Modern Warfare will update familiar franchise characters for a more contemporary context, but similar to how the best way to create objects in the game is to scan something in real life, character models are similarly done using motion capture and real actors — at least to create the in-game base character model. While this technology is common for major video game titles, the voice actors going full-on method for their performances is not.

Actor Barry Sloane plays the new Captain Price in Call of Duty: Modern Warfare, and he took the job extremely seriously, replaying all the old games and settling on a version of the character that pays homage to Billy Murray’s vocal performance in the original Modern Warfare. Emslie created Captain Price’s entire kit, outfit, and gear for the promotional photo shoot that will serve as the game’s box cover art and other materials. The process included picking out every piece of clothing, and even weathering the gloves.

For Sloane, the makeup team even had to fabricate some mutton chops to put on his face, which must have helped make the final look feel like a real transformation.

“It was really, really weird to see Captain Price as a person walking around,” Emslie says. “He came out and he does this actor thing where he breathes heavily to get hyped up. Then he grabbed his gun, went ‘RAAAAAAAHHH!!’ and lunged at the camera. I’m not shitting you, the entire room got scared and backed off. It was incredible.”

Customization is a key part of many video games, and Call of Duty is no exception. In Modern Warfare, Infinity Ward to this a step further by adding in a “Gun Bench” environment where players modify the weapons they’ll use in multiplayer and single-player gameplay. The Gun Bench was created by taking a three-dimensional scan of an actual workstation, making this the best game for anyone who values customization above all else, according to Multiplayer Design Director Joe Cecot.

“It’s almost like people who are into street tuner cars or building custom PCs,” Cecot says. “In elite military groups, they’re going to be custom-building weapons just like this.”

All that time spent customizing won’t disappear when you switch between game modes either. Call of Duty: Modern Warfare boasts a “unified progression” system, so progress made in any game mode gradually unlocks more and more customization options for a weapon, and each weapon comes with 30-60 attachments that can be unlocked.

How Modern Warfare Bullet Ballistics Will Outclass All Other Games

Achieving the realistic physics of ballistics in video games in near impossible, and what’s why most video games present flashy moving images to trick us into thinking we’re a badass soldier fighting on some battlefield. Sounds are fabricated, in-game character models are rendered in virtual worlds, and all of it comes together in a cheap approximation. You hear the word “hitscan” a lot when it comes to shooters. This refers to a common method of projectile programming in which a weapon fires instantly and travels for an infinite distance at infinite speeds. If it encounters an object that scans as a possible target, then a myriad of factors translate into damage dealt.

But in Call of Duty: Modern Warfare, a legitimate digital bullet flies out of the muzzle with every pull of the trigger thanks to an overhauled physics engine.

“The caliber of a weapon dictates recoil, muzzle velocity, and bullet penetration,” Cecot says. “The bullet actually travels. Every gun is a legitimate projectile. We put the actual mass of the bullet and muzzle velocity into the system.”

Every weapon has ballistics data determined by the real-life firing speed and bullet size. These factors also influence bullet penetration. Hitting a wall or other obstacle doesn’t register as impenetrable like in the vast majority of games. In Call of Duty: Modern Warfare, with a big enough gun, you can shoot through walls to eliminate your opponents.

Call of Duty: Modern Warfare’s Most Realistic Design Choice Is in the Sound

What if when a bullet hit a steel tank in Call of Duty: Modern Warfare, the sound was different from when it hit a rock wall? What about that same steel tank from 100 feet away versus 10 feet away? What about firing from the hip versus aiming down the sights? These are the challenges that Miller and the sound designers at Infinity Ward explored while working on Modern Warfare.

Like previous entries in the franchise, Call of Duty: Modern Warfare is best played at volumes that are almost too loud to handle. Real gunfire and explosions can blow out your ear drums, so if realism is what you want, this game really delivers.

Similar to how the in-game ballistics engine takes aim at approximating the physics of real guns, the approach to sound design went in a focused direction. They consulted with ex-military consultants to comprehend precisely how each weapon functions so they could capture sound in a more detailed way.

“We’re going to use this weapon in the game, we need to know how it operates. What is the mechanism inside explain this to us, so that we would know what we had to go capture,” Stephen Miller said. “We’re working on a Hollywood stage for our cinematics, all the animations, all the stuff you see in campaign or multiplayer — it’s all done the exact same way.”

But they also recorded sound in even more complex environments. “We went out in the desert, into the woods, out to an abandoned mine’s solo,” Miller said. “We put microphones down at the bottom of the mine and were setting off a propane cannon.”

The original Modern Warfare had no reverb engine, but the new game has four such engines. Two of them are for the individual player as they transition between spaces and two more are for the general area surrounding places where a bullet or explosion or the sound of an enemy reloading will spread out in an environment. Because bullets are really traveling, the way they interact with and impact the environment various wildly. Even the way a weapon sounds when firing from the hip versus aiming down the sights will differ slightly.

And get this. Sounds actually travel at the speed of sound. If you’re 100 meters away from an explosion and your teammate is 50 meters away, they’ll hear it a fraction of a second sooner.

Activision paid for travel expenses associated with this gameplay preview.