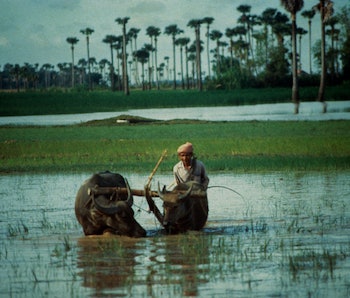 I outlined last week how increased climate change is destroying many farmers’ crops who reside near ocean coasts — especially poorer families that have few other options to make a living. All the while, global food demands are expected to increase by 60 percent.

But not all people are resigned to thinking we’ll simply need to adapt the way we eat. People like Bill Gates are foregrounding different ideas. In a blog post Tuesday, the former Microsoft CEO made a call for more funds to go towards research that will help poor farmers deal with the effects of climate change. And one of these tools he’s touting is something he calls “scuba rice” — a genetically modified crop meant to grow in floods.

“The rice farmers I met in Bihar, for instance, are now growing a new variety of flood-tolerant rice — nicknamed ‘scuba’ rice — that can survive two weeks underwater,” Gates says. “If shifts in the weather pattern bring more flooding to their region, they are already prepared for it.”

We might never know why that name was chosen, but regardless, scuba rice is already being grown in 600,000 hectares worldwide, mostly in countries like India, Bangladesh, the Philippines, and Indonesia.

Normal varieties of rice don’t do well in floods. In higher water levels, rice stems grow faster in order to try and give leaves some breathing space. The rice will die if it can’t make it out of the water, due to using up all its energy reserves. Scuba rice gets around this problem by simply going dormant in water, and waiting the flood out.

This solution is just the latest in a string of efforts by agriculture researchers to improve crops for an unknown future. The most famous of these GMO foods is probably “golden rice” — designed to withstand intense drought in regions with poor irrigation systems, such as East Africa.

Chances are, you will probably soon be eating such varieties of rice without even knowing it. (But don’t worry — they’re completely safe.)

More like this
Science
3 hours ago
The secret to saving our planet may be lurking in the dirt under our feet
By Tara Yarlagadda
Science
Oct. 2, 2022
Climate change could make one household pest increase its path of destruction
By Lucas Cernusak, Amy Zanne, Alexander Cheesman and The Conversation
Science
Oct. 2, 2022
Even if geoengineering worked, over half the world could keep heating up
By Patrick W. Keys, Curtis Bell, Elizabeth A. Barnes, James W. Hurrell, Noah Diffenbaugh and The Conversation
Related Tags
Share: