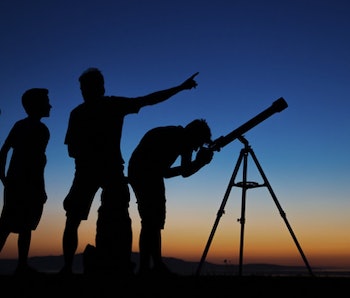 This weekend will bring one of the most exciting annual events on the astronomy calendar: the Perseid meteor shower. So here’s our handy, all you need to know guide to help you get the most from this stellar display of shooting stars.

What Is the Perseid Meteor Shower?

Every year, at about the same time — usually mid-July to mid-August — the Earth crosses the orbital path of a comet called Swift-Tuttle. Like most comets, it leaves a trail of debris behind it that slowly accumulates with each orbit it makes. When the planet Earth passes through that trail, these chunks of dust, rocks, and ice hurtle through our atmosphere at speeds of up to 130,000 miles per hour, causing a meteor shower.

The meteors are called the Perseids because the point from which they appear to come (called the radiant) lies in the constellation Perseus. At peak times, up to 80 can fall in an hour.

The comet that causes the Perseid meteors is called Swift–Tuttle (formally designated 109P/Swift–Tuttle). It’s known as a periodic comet, with an elliptical orbit around the sun that lasts 133 years. It was independently discovered by Lewis Swift on July 16, 1862 and Horace Parnell Tuttle on July 19, 1862, and it’s believed to have a nucleus of about 26km in diameter. The closest it gets to Earth is about 14,000,000 miles — or 58.6 lunar distances, the distance from the Earth to the moon, which is 238,900 miles.

In astronomical terms, this is quite close, but scientists have determined that it has a (relatively) stable orbit and does not pose a catastrophic threat to Earth — at least for the next 2,000 years.

A closer encounter is predicted when the comet returns in the year 3044, with its closest approach estimated to be just 1 million miles. Should Swift–Tuttle ever collide with Earth, the comet’s velocity and size would result in an extinction level event, wiping out all life on the surface of our planet.

Where Can I See the Perseid Meteor Shower?

The Perseid meteors are only visible in the northern hemisphere. The moon will be nearly full, so that light source might interfere with visibility a little.

The weather, of course, is a different matter. Check your local listings to see which nights will be clearest.

If you’re in a city, light pollution will obviously be a factor. It’s also possible that the best viewing time will be early in the morning, as opposed to late at night, so don’t stay out too late or you won’t be able to get up to see it!

When Can I See the Perseid Meteor Shower?

The Perseid meteor shower will peak on August 11, 12, and 13, but since the moon will be at its fullest then, the weekend may be best for viewing. Specifically, Sunday morning and possibly Monday.

You won’t need a telescope or binoculars, but if you have them, there’s no reason not to use them. Patience is the key element here, as you never know when the best time will be, and it could very well be after hours of skywatching. So bring comfortable chairs that you can lie back in — no one wants to have to wear a neck brace for the rest of the summer.

Check when the sun and moon are setting and rising in your area, stay warm, bring plenty of snacks…and enjoy the show.