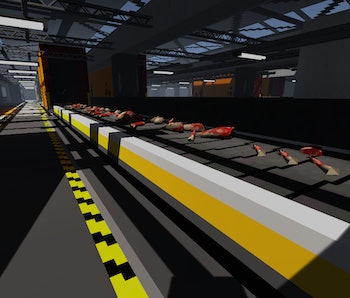 A free video game out of New Zealand has you taking the job of foreman in a meat processing plant. All pretty straightforward except for the Twilight Zone twist that the foreman is a cow and the meat is made of people. Truly, man is the most savage animal of all.

Popular Science reports game creator Alexey Botkov, of the Frogshark game studio, created the game as part of a competition where designers had 48 hours to make a game around the theme: “You are the monster.”

“I eat meat and I am a monster, really,” he told reporters. “More so because I’m aware of the issues, yet I’m still complicit. I guess [with the game] I’m questioning my own relationship with the whole thing and trying to figure out what my values are.”

The result is you playing from the bovine foreman’s point of view, marching up and down the processing line to watch the corpses bled, dismembered, and finally packaged. There is no sound, something Botkov says he may have added with more time, and nothing you can do to stop the progression from body to burger. It’s not so much a traditional video game as an art installation for your laptop. Is that enough to get you to change your diet? Pass the bacon.